At the announcement of First National Bank’s (FNB) headline sponsorship of the Dusi Canoe Marathon last week, it was announced that Euro Steel, which sponsored the top three men’s finishers and the women who ended first, second and fourth in this year’s event, would be extending their involvement with the iconic Pietermaritzburg to Durban race.Part of the extended sponsorship will include bringing a number of top overseas paddlers out for February’s three-day epic. 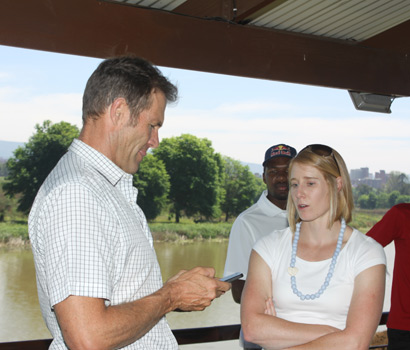 “It excites me. It adds a bit of depth to Dusi. It’s not lacking, but it is always good to have more strong competitors and combinations,” five-time Dusi winner Andy Birkett said. “With the calibre of paddlers that are coming over – Jakub Adam [who will be paddling] with Jason Graham, Anna Kožíšková with Abby Solms, and possibly Adrián Boros – it will raise the bar big time.”

As points of reference, Adam, who is Kožíšková’s brother, has previous Dusi experience and at the ICF Canoe Marathon World Championships this year finished seventh in the K1 race and sixth in the K2s. Boros was more impressive, finishing second to Hank McGregor in the K1 clash, and edging out McGregor and Jasper Mocke for the K2 title with László Solti. Kožíšková, meanwhile, won the women’s K1 world title and finished second in the K2 race with Lenka Hrochová. Birkett placed sixth in the men’s K1 race and twelfth with Greg Louw in the K2s.

“It is also nice that the international paddlers have been paired up with strong South Africans,” Birkett added. “Those three combinations should be really strong. They won’t be at a disadvantage because they’re with South African partners. They will know where to go. They should get good results.”

Brett Austen Smith, General Manager of Natal Canoe Club (NCC), the Dusi hosts, praised Wilson and Euro Steel for the support they have given paddlers. “It has been phenomenal,” he said unequivocally. “It is critical that the top paddlers have some form of support and financial income that they can derive from canoeing. Sponsors like Euro Steel have really helped people live a professional sporting life, and be able to concentrate 100 percent on canoeing, which is fantastic for the sport, and it really raises the level, not only from a Dusi perspective, but also from a marathon perspective.”

Birkett, who is a member of NCC, agreed: “The sponsorship has been a great opportunity for me and all the other Dusi paddlers that have benefitted from it, in order to take a more professional approach to paddling and to Dusi. It’s a sport we all love, and to be able to take it more seriously has been great.”

Lauding Dusi paddlers as people of “amazing character, in terms of their ethics, their endurance and in terms of their friendliness, Wilson concluded: “I am absolutely grateful for what paddling has done for me in my life, and for how much value it has added. I could never give back as much as I have taken out, but this is a small effort to try and do that.”