Schoolgirl paddling sensations Cana Peek and Kyeta Purchase have been in sublime form throughout 2015 and are eager to use Sunday, 29 November’s Ozzie Gladwin Canoe Marathon presented by Parklane Superspar as another opportunity to grow their exciting 2016 FNB Dusi partnership. 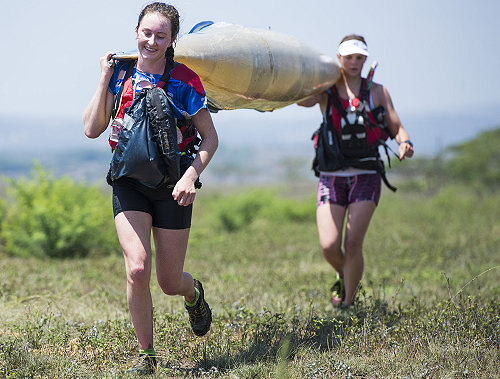 Individually the Euro Steel pair have taken the South African women’s paddling scene by storm with the two young teenagers now eager to continue their good run of form together.

“We hadn’t ever paddled together until the start of the KZN river season this year,” explained Peek.

“We met when I joined the MACSquad in Durban for a few training sessions and then Kyeta and I went to Marathon Worlds together where we ended up becoming quite close.

“We got chatting at Fish about paddling Dusi together and things have just developed from there!” she added.

The recent Umpetha Challenge was an eye-opening experience for the young duo as they both looked to shake off exam cobwebs and take on some of the best senior crews in the province.

“Umpetha was quite a wake-up call for us and made us realise that we really need to start our Dusi training as soon as we’re finished exams!

“It also made us realise that we’re still new as a combination and so we’re not quite used to each other style of paddling and reactions.”

Despite their young age, lack of time in the boat together and the fact that the 2016 FNB Dusi will be Purchase’s debut at the iconic three day event, Peek is unperturbed and believes they can achieve the goals they have set themselves as they look to rub shoulders with their senior compatriots.

“We want to win the Under-18 girls title at Dusi next year and do as well as we can in the ladies race overall!” said Peek decisively.

“We’re both very determined people and age won’t stand between us and our goals.

“Kyeta is a very strong paddler and is willing to work really hard so her having never done a Dusi isn’t a concern for me at all,” she added.

The upcoming Ozzie Gladwin provides the young talents with an opportunity to spend some more time in the boat together and get used to dealing with the pressures of racing as a pair.

“When we did Dam2Dam together we covered the same stretch of the upper Mngeni so we should be able to take some confidence from that.

“With us having also spent more time in the boat together at Umpetha, hopefully we can take another step forward in our partnership at Ozzie Gladwin next weekend!”

The 2015 Ozzie Gladwin Canoe Marathon gets underway at 09h00 on Sunday, 29 November at Albert Falls Dam and finishes 26km later at Thornvale Farm.