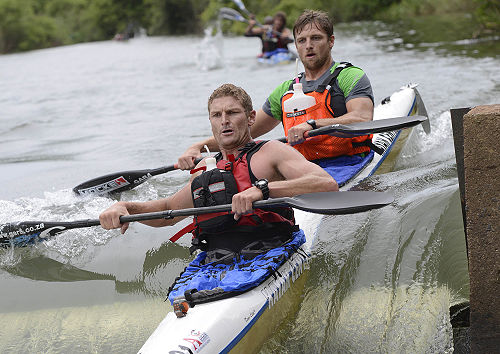 McGregor – who has won the 2009, 2011 and 2013 K2 titles at the event –will not take to the water on Sunday with 2016 FNB Dusi Canoe Marathon partner Jasper Mocké though and will instead combine with 2004 K1 Ozzie Gladwin winner and two-time K2 Dusi champion Jason Graham.

“Jasper (Mocké) is still in Australia as he will be competing in the Perth Doctor surfski race this weekend and Jason (Graham)’s partner, Jakub Adam, is still overseas so we were both partnerless for this weekend,” explained Euro Steel/Kayak Centre’s McGregor.

“Jason is a formidable athlete so hopefully we can put on a good show at Ozzie Gladwin this weekend!” he added.

The pair have never competed together previously and enjoyed just one training paddle together at the Kingfisher Canoe Club weekly dice shortly before McGregor departed for Hong Kong however the three-time Ozzie Gladwin defending champ isn’t concerned by the pair’s lack of time in the boat together.

“I’ve never done a K1 Ozzie Gladwin before but I’ve won the last three K2 races there and each time it has been with a different partner.

“If we could make it number four this weekend that would be pretty cool but realistically we don’t have any expectations.

“It’s a race I seem to enjoy and a fantastic event to be a part of so hopefully we just have a good outing together on Sunday.”

While the occasion won’t allow for either McGregor or Graham to work on their FNB Dusi partnership under race conditions, the pair will have a beady eye on their fellow Dusi podium hopefuls, and possibly each other as well.

“It will be great to race against crews like Andy (Birkett) and Lance (Kime) as well as Sbonelo (Khwela) and Banetse (Nkhoesa) who are definite Dusi podium contenders and both Jason and I will be watching them closely for sure.

“It will be a great opportunity to suss those guys out and figure out their strengths and weaknesses.

“Jason and I will probably be trying to figure out each other’s strengths and weaknesses as well; hopefully we can only show each other our strengths though and we can put in a good performance,” laughed McGregor.

With paddlers’ ability to run with a boat on their shoulder receiving the ultimate test at the Dusi, McGregor has looked to maintain his running throughout the year with Sunday’s 2km portage around Albert Falls Dam wall another opportunity to get some kilometers under the belt.

“I’ll sit in the front and then when we get to the portage Jason will take the boat and I’ll take the paddles,” McGregor added tongue in cheek.

“Jasper and I said we were always going to do another Dusi together so I’ve kept my running ticking over since this year’s Dusi and have been running quite a bit lately.

“I ran with my wife in Hong Kong, and there it is just mountains, so hopefully that will help this weekend!”

The 2015 Ozzie Gladwin Canoe Marathon gets underway at 09h00 on Sunday, 29 November at Albert Falls Dam and finishes 26km later at Thornvale Farm. More info can be found at www.ozziegladwin.co.za