A fiery contest awaits participants of Sunday’s 2015 Ozzie Gladwin Canoe Marathon presented by Parklane Superspar as most of next year’s FNB Dusi Canoe Marathon top contenders look to challenge for the coveted title and put in a strong showing at the key Dusi seeding race. 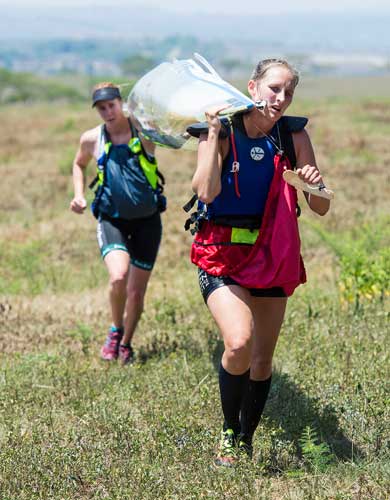 Starting on the picturesque Albert Falls Dam, paddlers complete a 4km flat water dice before a short, taxing portage around the dam wall down to the upper Mngeni River where 20km of rapids, weirs and various other obstacles await.

2014 K2 Dusi winners Andy Birkett and Sbonelo Khwela have gone their separate ways ahead of February’s three day race from Pietermaritzburg to Durban and, with fresh partners in tow, will be eager to continue their Dusi build up positively this weekend.

Sunday’s Ozzie Gladwin sees Birkett and 2013 K1 Dusi winner Lance Kime get into a boat together for the very first time with many eager to see just how well the Euro Steel pair combine.

While Birkett and Kime’s partnership remains in it’s infancy, Khwela (Euro Steel/Red Bull) and fellow Shongweni based competitor Banetse Nkhoesa (Euro Steel/Computershare Change a Life Academy) will be hoping to build on the confidence they gained from their recent Umpetha Challenge victory.

The third Dusi title hopeful combination, Hank McGregor (Euro Steel/Kayak Centre) and Jasper Mocké (Euro Steel/Mocké Paddling), are the most recent winners of the Ozzie Gladwin K2 crown however won’t look to defend their title due to Mocké’s participation in the Perth Doctor surfski race in Australia this weekend.

McGregor, having won the event’s 2009 and 2011 titles too, will instead combine with 2004 Ozzie Gladwin winner and double Dusi K2 champion Jason Graham who is also partnerless due to his Dusi partner Jakub Adam of the Czech Republic having not yet arrived in South Africa.

Len Jenkins, back from some time in the paddling wilderness and the holder of the most Ozzie Gladwin titles, will too look to continue his Dusi preparations when he and ADreach team mate Siseko Ntondini from Soweto Canoe and Recreation Club (SCARC) build on from their recent Hansa Fish and Umpetha Challenge third and fourth place efforts.

In the women’s race, with Abby Solms and Jenna Ward’s respective international Dusi partners not yet available, the pair will continue their already successful temporary partnership.

Despite their lack of past experience together, Solms (Euro Steel) and MACSquad’s Ward cruised to a comfortable win at the recent Umpetha Challenge and will be hoping for more of the same again on Sunday.

The pair will however have Euro Steel’s teenage sensations Cana Peek and Kyeta Purchase to overcome if they are to reign supreme.

Peek and Purchase, yet another new partnership, started positively when they followed Solms and Ward home a few weeks ago and the two youngsters will be looking to take another step forward in their Dusi build up.

Despite much of KZN suffering at the hands of a national drought, Sunday’s Natal Canoe Club race will enjoy a water release from Albert Falls – a holding dam rather than a water supply facility – which should help raise the low water levels of the Mngeni River.

While the sport’s racing snakes look to improve their Dusi seeding index, some a little further back in the field will turn to the occasion as an opportunity to dust off their canoes for the first time this season while the stars of the future will also enjoy an opportunity to be part of the day’s action courtesy of the Guppies Race on the flat water of Albert Falls Dam.

The 2015 Ozzie Gladwin Canoe Marathon gets underway at 09h00 on Sunday, 29 November at Albert Falls Dam and finishes 26km later at Thornvale Farm.