Andy Birkett and Lance Kime outwitted and outsmarted a class field of canoeists to claim the key Ozzie Gladwin presented by Parklane Superspar laurels on the upper Mngeni River on Sunday.

The Euro Steel duo were paddling together for only the second time, following a skittish outing at the NCC Dice on Thursday evening, but put it all together on the day to win their first race together, and sound an ominous warning at the start of the FNB Dusi season.

The three K2s were together going into the final three kilometres of rocky rapids at the end of the 29 kilometre race.

First Jenkins made a tactical error, choosing a line down a rocky rapid that left them high and dry, allowing the other two boats to scamper away.

“It all came down to line choices in the last few rapids,” said an elated Birkett afterwards. “Lance (Kime) drove beautifully – I think he is one of the best river readers around at the moment.

“Luckily I had tripped this section earlier in the season, so I was able to give him some advice about which lines to take.

“Every time we came out of a small channel or rapid it seemed we had made ten or twenty metres on Sbonelo (Khwela) and Banetse (Nkhoesa) and each time we put down the hammer and we able to open up the gap,” said Birkett.

Khwela and Nkhoesa finished second, satisfied with their showing and bowing to the superior knowledge of the intricacies of the lines in the closing stages of the race.

“We ran well on the portage and got to the hotspot at the Albert Falls weir first,” said Khwela. “It is still early days before the Dusi, and we have got lots of work to do before that,” he added.

The intriguing crew of World Champion Hank McGregor and former Dusi winner Jason Graham looked like they were going to be a significant factor in the race after leading the pack off Albert Falls Dam after the first three kilometres flatwater haul.

However McGregor (Jeep Team/Euro Steel) struggled with his drinking system, which hamstrung their progress on the two kilometre portage around the dam wall, and by the time they put in on the Mngeni River they had been dropped by the lead trio, and paddled the remainder of the race alone in fourth place.

Local Thulani Mbanjwa and Cape-based Shaun Rubenstein showed that their their plans to cobble together a serious FNB Dusi challenge were to be taken seriously as they raced into the top five, edging out Ant Stott and Carl Folscher. 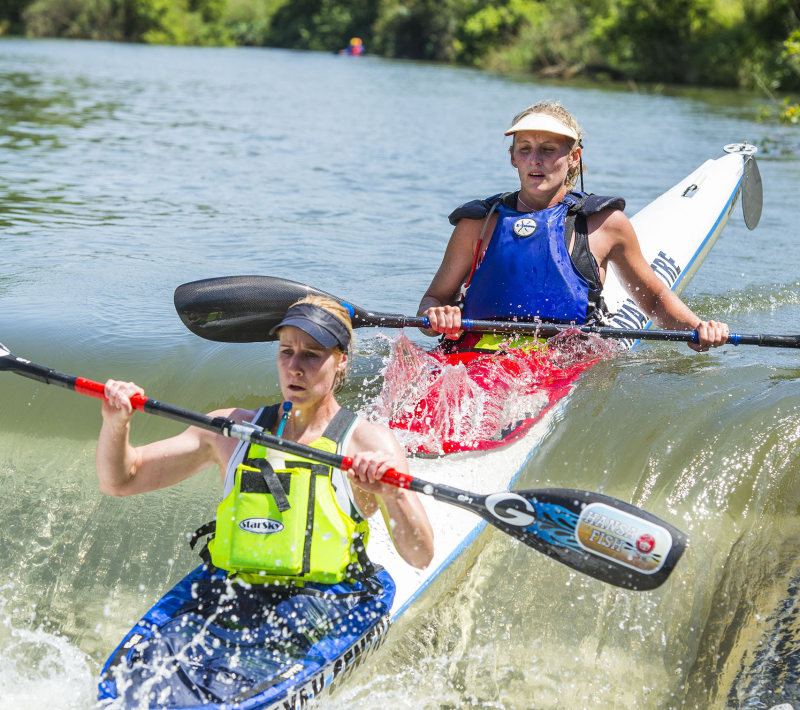 The women’s race quickly fell into the clutches of pre-race favourites Abby Solms and Jenna Ward (Euro Steel/MacSquad). After exiting the dam leg in a tightly packed group of strong female K2 crews, they ran their way into the lead on the portage and then paddled away to post a flawless day and a four and a half minute victory over Bridgitte Hartley and Donna Tutton.

For Solms and Ward, they can look forward to extending their flourishing partnership into next weekend’s 50 Miler on the FNB Dusi course, before they pair up with their respective partners for the three day classic from Camps Drift to Blue Lagoon in February.

Promising Team Euro Steel juniors Cana Peek and Kyeta Purchase rounded off the women’s podium, and might have been able to improve on their overall result had Peek not been battling with the after effects of having run the tough 21km Sani Stagger the day before.