The fourteenth edition of the unique Canvas Dusi Canoe Marathon will start on Thursday 3 December, but, unusually, it will not follow the entire original Dusi route due to the drought conditions gripping the province. 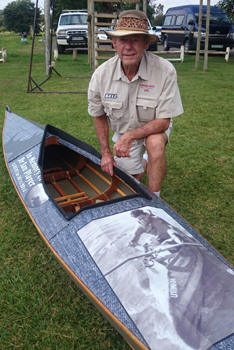 Using boats made of wood and canvas replicating those used by the pioneers of the race in the 1960s, a hardy group of paddling enthusiasts takes advantage of the water release for the 50 Miler on the first weekend of December every year to commemorate the pioneering spirit of the early Dusi adventurers.

However the tight water restrictions in place to combat the drought have meant that there will be no water flowing from Inanda dam, forcing the adventurers to stop their trip at Inanda dam instead of the traditional finish of the FNB Dusi at Blue Lagoon in Durban.

Twenty-two intrepid adventurers will set off from Camps Drift planning to finish at Inanda Dam within four days and organiser Anton Venter, who has done all thirteen Canvas Dusi’s, is as prepared as ever for the trip as he has been in the past.

“We will be cutting this year’s canvas Dusi short and finishing at Inanda Dam because of the fact that there is no water below the dam wall and carrying the boats to Durban was not an option,”  said  Venter.

“It would be a case of carrying the boats all the way to Blue Lagoon and paddling the short last stretch so we decided that we would end at Inanda this year.”

Despite the enforced change to the commemorative paddle, Venter said that a record field of paddlers will be starting the Canvas Dusi on Thursday, including the first females to take part.

“We have gathered the biggest field in the thirteen years of the Canvas Dusi this year,” Venter said. “We have got a number of the usual guys back this year and in what is a first for the adventure we have two ladies taking part this year!”

The new lady adventurers have been pushing to be included in the Canvas Dusi and following the decision to allow them to take part the two women have immersed themselves in the preparations ahead of the epic journey.

“We had a bit of pressure from the ladies and it was important that they knew what had to go into the planning and preparation for the race but we are happy that they have taken this on and are fully involved.

“We have to build the boats which takes a lot of time and effort and the ladies have bought into the entire process,” a satisfied Venter mentioned.

Women were first allowed to take part in the FNB Dusi in 1981, in the company of a male paddlers in the mixed doubles category. They were allowed to race in singles in 1985.

For the paddlers of the canvas Dusi the trip is about taking in the Valley of a Thousand Hills and making the most of the adventure – the element that Venter looks forward to the most.

“Us older guys are a lot more laid back and take it very easy as we take in the scenery as well as the bird life and enjoy the stops for lunch and all that.

“We do try and see if the river has changed and it does give us a chance to learn the rapids and see if there have been any adjustments during the winter,” he added.

The relaxed atmosphere of the journey is the cornerstone of the event as Venter prepares to take on what would appear to be a low river however he is not worried about the water level.

“The water level shouldn’t be an issue for us but if it does become an issue then we will just do what we have to too help out whoever is struggling. That is something that is very important to us.

“We originally paddled the canvas Dusi in these sort of conditions and then we managed to piggy-back off the water release for the 50 Miler so that helped us nicely but a lot of us are not too unfamiliar with the conditions,” a relaxed Venter added.

The team will use the iconic Mfula Store in the valley as their base as they look to get to Inanda Dam unscathed and with their canvas canoes in one piece.