Hank McGregor and Jasper Mocké put their previous StaminaGro 50 Miler Canoe Marathon misfortunes aside to clinch an important victory this past weekend as their combined 2016 FNB Dusi preparation clicks into top gear. 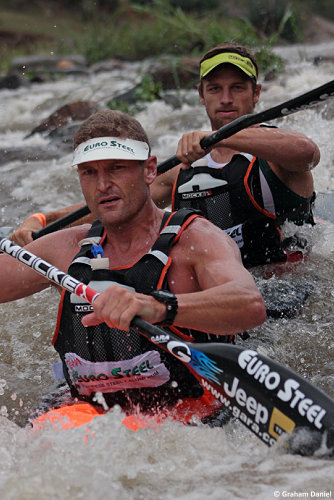 “Having wrapped at Island Rapid two years ago, that was my first 50 Miler finish, let alone win, so it was very nice to get the win!” explained Mocké.

“Some see 50 Miler as another Dusi seeding race but it is also a really prestigious race in its own right and so from that point of view it was also great to have won on the weekend!” he added.

The Euro Steel/Mocké Paddling pair’s 50 Miler success sees them reaffirm their status as definite FNB Dusi contenders as they look to go one better than their 2014 second placed effort in February’s Pietermaritzburg to Durban clash.

“We’d love to win Dusi!” confirmed Mocké definitively. “Any race I enter I’d like to win!”

“A Dusi win isn’t going to define my paddling career but when Hank (McGregor) and I line up on Camps Drift on the 18th of February next year we’ll definitely be hoping to win it!”

The pair – top performers across surfski, river and flat water marathon disciplines alike – have spent precious little time in the boat together of late due to their frenetic schedules and international commitments.

While McGregor has spread his time between Durban and Hong Kong’s oceans and rivers, Mocké has battled it out on the Australian surfski scene when not at his Cape Town headquarters.

Mocké isn’t concerned by the pair’s unique circumstances though and believes time is on his and McGregor’s side still.

“The feeling between being in a surfski and being on the river is completely different so it is a challenge crossing over between the two however we’ve only got two more weeks of surfski races left and then we’ve there are another two months until Dusi!

“Hank and I chat about everything paddling on the phone all the time and whenever we see each other plus our combo has been going for a while now so we feel great in the boat together.

“Like Andy (Birkett), Hank’s and my fitness doesn’t really fluctuate too much, we’re pretty fit almost all of the time so come Dusi we’ll be fine!”

The drought that continues to plague KwaZulu-Natal meant the 50 Miler was raced on a lower river level than what many expect during the FNB Dusi.

With conditions testing and Mocké and McGregor’s running abilities sometimes questioned, the pair were pleased with their dual disciplined effort.

“The water level of 50 Miler did mean it was more of a Dusi style race than usual but it certainly still favoured the paddlers more than the runners,” said Mocké.

“The two portages on Day Two – each of two to three kilometers – were a good test and we are happy with where our running is at the moment and it will probably get a bit stronger over the next couple of months!”