Sbonelo Khwela and Banetse Nkhoesa believe their 2016 FNB Dusi Canoe Marathon plans are well on track as they look to overcome the challenge of a stellar K2 field and fly the Shongweni Valley flag high in February next year. 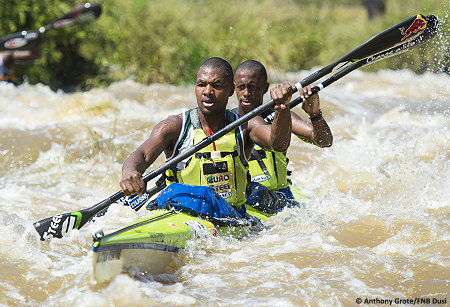 Despite suffering a minor setback in their build-up campaign this past weekend when they were disqualified from third place in the StaminaGro 50 Miler Canoe Marathon – a key pre-Dusi seeding race – for taking an illegal portage, Khwela and Nkhoesa are happy with their partnership’s progress.

“We are just getting better and better the more time we spend together in the boat and so hopefully come January we will be very close to our best!” explained Euro Steel/Red Bull’s Khwela.

“It was unfortunate to get disqualified this past weekend; there were two paths open up Nqumeni (portage) for this year’s Dusi but we didn’t hear the announcement that we couldn’t take the one for 50 Miler.

“When I saw Murray Starr (and Owen Gandar) go down to the second take-out, I told Banetse (Nkhoesa) that we were going to go to the first one to compare times.

“I didn’t realise we weren’t allowed to do it though and so it was disappointing but we were still very happy with how our two days of racing at the 50 Miler went!” he added.

While tipped by many as one part of the Dusi’s pre-race podium trio, Khwela believes the race for even a top ten position will be a gruelling one in 2016.

“The top ten at Dusi next year will be so, so tough; if you can get a top ten next year then you are a very good K2!

“To win next year’s Dusi would be a dream come true for us but I can’t put pressure on Banetse to try push for a win because he has never been in the top five before.

“So for us, we’d like to be on the podium at next year’s Dusi and if we can get a win then that would be such a great bonus!” said Khwela.

With the likes of Euro Steel’s Andy Birkett and Lance Kime, Euro Steel/Mocké Paddling’s Hank McGregor and Jasper Mocké, ADreach’s Len Jenkins and Siseko Ntondini and a host of other top crews set to be in next year’s Dusi mix, Khwela believes if the pair are to emerge victorious, they will need a strong Day One showing.

“It will be very difficult to do but I would love to have a five minute lead after Day One at Dusi!” said Khwela.

“Lance (Kime) is such a good driver and is so good on Day Two and Hank (McGregor) is going to be flying to try catch up if he (and Jasper Mocké) lost any time on Day One so it would be great if we could have a lead after Day One.”

With the pair – Khwela an ambassador for the Computershare Change a Life Academy and Nkhoesa a current shining star of Martin Dreyer’s renowned setup – both hailing from Shongweni Valley, that is where they have based themselves for training and hope to perform admirably during next year’s Dusi for their home community.

“At the moment we are trying to work as hard as we can on our paddling at Shongweni Dam near own home because that is our weaker point.

“It will be tough but if we can win Dusi next year then we will be the heroes of Shongweni; the party afterwards will be so big that we will have to slaughter at least two cows!” laughed Khwela.