Potential super-pair of Lance Kime and Andy Birkett have already tasted success in the early parts of the 2016 FNB Dusi Canoe Marathon season with Kime clearly rejuvenated by a lengthy sabbatical from paddling. 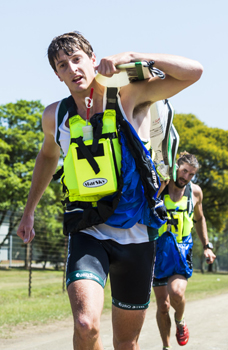 The victory for the pair at the competitive Ozzie Gladwin Canoe Marathon set them up as one of the crews to beat at the 2016 Pietermaritzburg to Durban showpiece and the early rise for the pair seemed to come unexpectedly.

“We really didn’t think that we would go as well as we did at Ozzie,” mentioned a surprised Kime. “We are still sorting out a couple of issues but that’s natural.

“We just couldn’t catch Hank (McGregor) and Jasper (Mocké) on the dam which we sort of expected because they are a really strong crew.

“On the whole I think we have been going pretty well so that’s good for us going forward.”

Kime’s eight month sabbatical from the sport began after the Non-Stop Dusi this year and the break seems to have been just the tonic that the Euro Steel star needed.

“The biggest thing that I have missed is the training and being fit,” he explained.

“When you have those endorphins running through you, you feel great so I have got that motivation to train back which is something I think I was lacking towards the end.

“It’s not that daily grind that it used to feel like which is great and with the only bit of paddling I have being on a sit-on-top it is good to get back into a proper boat and train hard.

“It wasn’t difficult getting back into the rhythm either. I find it more difficult to get back into it after a few weeks off to be honest,” he added candidly.

The Euro Steel pair of Kime and Birkett, who have a combined seven Dusi titles between them, have a mountain of Dusi experience and with a low Dusi expected the decision on who was going to sit in the front of the boat was not a difficult one.

“With a low river expected I am going to sit in the front.

“The lighter paddler should sit in the front of the boat but the driving bit became a bit of a problem at 50 Miler recently!

“I haven’t driven that section of river in a few years so had to rely on Andy’s backseat driving skills to get us through some of the sections!” mentioned Kime with a smile.

Kime, who has been travelling through Europe, is the first to admit that he was short on fitness training whilst exploring the Northern Hemisphere and knows that with some tough combinations challenging for the Dusi title they will have their work cut out for them.

“We know that Sbonelo (Khwela) and Banetse (Nkhoesa) are going to be unbelievably strong runners and that Hank (McGregor) and Jasper (Mocké) are so strong paddling.

“We think that we have got quite a good balance between the two but we still have a lot of work to do before the race in February.

“I have been short on running training while I have been travelling but I managed to do quite a bit of hiking towards the end of my time in Europe so I don’t think that I am too far off,” he said.