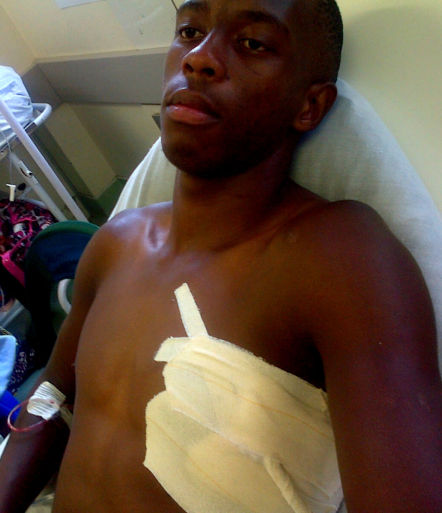 that left him with serious injuries to his scapula and surrounding muscles, leaving him in severe pain and putting his much-talked-about FNB Dusi title challenge in jeopardy.

While refusing to dwell on the apparently random attack, Nkhoesa is digging deep to find the mental strength to stay focussed on his dream of winning the FNB Dusi doubles title with his idol Khwela.

“It was the best day of my life as I had managed to beat Eric (Sbonelo Khwela) for the first time in a club time trial,” said Nkhoesa.

A few hours later he was bandaged with drains emerging from his injured shoulder following the late night attack.

“It is not a great situation,” said Nkhoesa. “To lose fifteen days at this stage in our Dusi training is not great. All I want to do is hurry up the recovery so that we can get back to training. Right now I can’t do anything.”

Nkhoesa is a member of the Elite Athlete Development programme run by the KZN Department of Sport and Recreation at the Prime HPI facility at Moses Mabhida stadium, where the team of doctors and medical experts has swung into action to help the injured youngster.

“They have been brilliant!” said Nkhoesa. “I have a good feeling about my recovery after hearing what Doctor Marshall had to say.”

He added that his paddling partner Khwela (Euro Steel/Red Bull) had also been extremely understanding and supportive.

“He has been really good about this set-back, and has been right by my side. I feel I owe it to him to recover as quickly as I can to repay the faith he has showed in deciding to do the Dusi with me.”

“I won’t give up,” he added. “We have worked so hard, and I have managed to get my performance to such a high level. I really feel that we can win this Dusi. It’s my time now.”

Nkhoesa burst onto the scene from the ranks of the Computershare Change a Life Academy of which his partner Khwela was also a founding member, and stunned the paddling community when Khwela opted to commit to the 2016 FNB Dusi with his Shongweni valley neighbour ahead of a title defence with Andy Birkett, with whom he won the last Dusi K2 title.