Defending K2 champion Sbonelo Khwela tops the list of aspiring FNB Dusi paddlers struggling to come to terms with a spate of injuries to top contenders, with time running out ahead of the three day paddling and running adventure from Camps Drift, Pietermaritzburg to Durban’s Blue Lagoon in four weeks’ time. 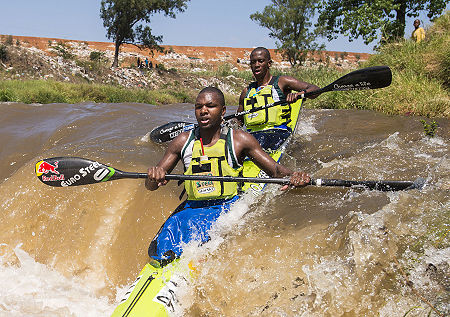 Euro Steel/Red Bull star Khwela’s bid to retain the K2 title that he won with Andy Birkett hangs in the balance following injuries to both his first choice partner, Banetse Nkhoesa, and his replacement, Nhlanhla Cele in the space of four weeks.

“I don’t know what to do, I’m so confused at the moment!” said a bewildered Khwela.

Khwela and fellow Shongweni resident and good friend Nkhoesa (Computershare Change a Life Academy) had formed a formidable partnership that saw them clinch victory in the Umpetha Challenge and second place in the Ozzie Gladwin presented by Parklane Superspar.

A harrowing home intrusion and stabbing ordeal shortly before Christmas however saw Nkhoesa hospitalized with serious injuries to his scapula, surrounding muscles and lungs.

With Nkhoesa’s recovery time uncertain, Khwela was forced to explore alternate options as both a short term training fix as well as a potential permanent Dusi solution should Nkhoesa fail to fully recover in time.

The availability of 2015 Non-Stop Dusi winner Nhlanhla Cele – remarkably still partnerless at the time of Nkhoesa’s tragic incident – appeared to ease Khwela’s concerns though and the pair immediately looked to pick up from where Khwela and Nkhoesa had left off.

This weekend saw disaster strike for a second time though when Cele dislocated his shoulder five kilometers from the finish line of the second stage of the Euro Steel Highveld Croc in Gauteng, his and Khwela’s first competitive outing together.

After completing the final few kilometers in excruciating pain, Cele’s trip to a local medical facility to have his shoulder relocated saw doctors also deliver some disappointing news.

“The doctors in Jo’burg said Nhlanhla will need to rest for three weeks for his shoulder to recover,” said Khwela.

With Nkhoesa fortunate to be on the KZN Department of Sport and Recreation backed Elite Athlete Development Programme and currently benefitting from excellent support from Dr Kevin Subban at the Prime HPI facility at Moses Mabhida Stadium, all hope of his recovery not all lost just yet.

However, as Nkhoesa continues to walk the pathway to recovery faster than most, his plans of trying to push through a reduced lung capacity due to his stabbing are under strain with the his latest return to strenuous training seemingly taking its toll on his body.

“As Banetse tries to push hard, so his body gets weaker and so it seems he still needs to rest,” said Khwela.

“On Monday Nhlanhla said he was feeling good and his shoulder was feeling strong but now I don’t know what to think.

“For now I will keep thinking about my options and hopefully I will find some answers soon, definitely before entries close on Wednesday, 27 January!”

Another high profile, podium hopeful crew to have been impacted on by a ill-timed shoulder dislocation is Kayak Center/Starsky’s Owen Gandar and Murray Starr.

Starr also suffered a similar feat to Cele this past weekend, this time while competing in the Hi-Q Challenge at Albert Falls Dam.

“I tripped on a metal stake in the ground and went crashing to the ground, landing pretty hard on my shoulder and it dislocated,” explained Starr.

“Fortunately it popped straight back in though so it wasn’t anything too serious but we decided to end our race there and then to avoid doing any more damage.

“A rest from paddling this week and then I should be back on the water though,” he added.