As the 2016 FNB Dusi Canoe Marathon draws ever closer, ladies favourites Abby Solms and Anna Kožíšková’s are looking forward to reuniting again ahead of the 18-20 February spectacle after having spent much of the recent months training individually, halfway across the globe from each other. 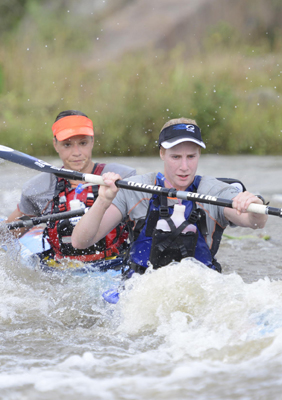 As was the case ahead of their 2014 FNB Dusi challenge, the pair have been preparing on separate continents with Adie based at Natal Canoe Club in Pietermaritzburg and Kožíšková with her husband in Hungary.

Kožíšková’s bid to be in top shape when she arrives in South Africa on Tuesday, 26 January was made even tougher with her having to deal the harsh Eastern European winter conditions.

“I cannot wait to get to South Africa for one of the best races that I have ever done!” current K1 Marathon World Champ Kožíšková mentioned excitedly.

“I have just finished my final cross-country skiing training camp, my last race was over the weekend and then I will be flying to South Africa on Tuesday.”

“I finished second in my last race two weeks ago, which I was really happy with and it showed that I am in good shape at the moment.”

With one outing at the FNB Dusi under her belt already, Kožíšková feels that she will be better equipped to deal with the Dusi’s tough conditions this time around than she was in 2014.

“At the moment it is 12 degrees below zero so it is going to be interesting when I get into the heat of the Dusi Valley!

“The big advantage for me is that I know the river now; I know the rapids and the portages which is important going into such a big race like the Dusi,” she stressed.

2014 was a race that did not quite go the way of Kožíšková and Solms as the pair finished a narrow second behind Robyn Kime and Abbey Ulansky.

The Czech star would however have gained invaluable experience from such a tough three days in the Valley of a Thousand Hills.

“2014 was a tough race for us as I cut my knee open on day one and had to get ten stitches as well as breaking my paddle on the Island portage on day three.

“We still came second though, which was great for us.

“I am really looking forward to this special race in such an incredible part of the world!” an excited Kožíšková mentioned.

Despite having gained years of experience on the uMsundusi and uMngeni Rivers, Kožíšková ‘s partner Solms had hoped to have spent more time on the river ahead of this year’s FNB Dusi than the crippling drought has allowed.

“When Anna arrives we will have to do some river prep, if we are able to,” Solms said.

“I realised during the StaminoGro 50-Miler that I do need to brush up on quite a few lines.”

Solms’ FNB Dusi rustiness has also have been compounded somewhat by her decision to opt out of a competitive K1 effort in 2015 in favour of a social effort with her father, Patrick Adie.

“With not racing last year I didn’t do the river prep that I did in the past.

“Things always change on the river, like hyacinth, too.

“I would really like for Anna and I to be able to do some river sessions together before Dusi!”

While eager to return to the waters upon which she and Kožíšková will compete on in just a few weeks’ time, Solms will draw confidence from the peak physical condition she is in after much hard work both on the water, the trails and in the gym in recent months.

Solms’ river skills also received a welcome sharpening this past weekend during her resounding victory at the N3TC Drak Challenge in the Southern Drakensberg, prompting many to label the pair as undoubted favourites to lead the charge for the 2016 FNB Dusi women’s title.

“It is my best opportunity to win the Dusi yet!” said the six-time FNB Dusi runner-up.

“It is unfortunate that Abbey Ulansky and Robyn Kime – our main competition two years ago – won’t be entering but I am going to be as fit and prepared as I ever have been, as if Abbey and Robyn were there on the start line.

” You can’t be too blasé. Anything can happen, so you need to be as ready as possible come race day.

“On the start line, I am going to be as prepared as I can be!”