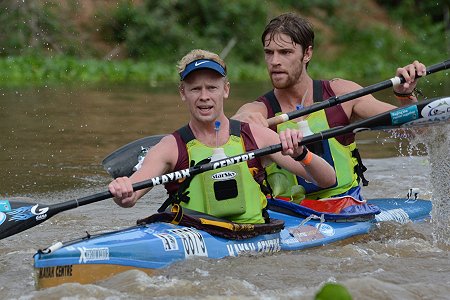 Having both performed admirably at junior and Under-23 level, the Kayak Centre/Starsky duo’s recent results at senior level have proven they have what it takes to compete with the country’s best.

Despite a wealth of talented crews set to take on this year’s FNB Dusi, Gandar and Starr are confident they have what it takes to mix it up with the best in the business.

“We like to think a top five is on for us and, if it goes well, then a place on the podium would be great!” explained Gandar.

“It is going to be such a tough Dusi to call though because there isn’t water in the rivers so the top crews are not going to race each other Dusi style before the actual race. It’s a bit like shooting in the dark!

“We really back ourselves for this Dusi though!” he added definitively.

The pair announced their FNB Dusi podium intentions with a third place effort at the 2015 StaminaGro 50 Miler – a key Dusi seeding race – in December, a maiden podium for both Gandar and Starr at senior level at any of the country’s major races.

Gandar then added a first ever K1 top three to his recent list of paddling achievements this last weekend when he occupied the bottom step of the podium at the N3TC Drak Challenge in Underberg.

Gandar is pleased with his and Starr’s form and appreciated the rare opportunity to spend some time on the river during the Drak Challenge but is reluctant to believe that these performances will have a significant impact on this year’s FNB Dusi contest.

“The 50 miler was great but it was so early in the season that you really can’t read too much into those results!

“I was also fairly happy with my Drak result but you can’t read into it from a Dusi perspective too much either as the Drak is purely a paddling race while the Dusi is sorted out on the portages.”

“That said though, this season has been pretty unusual because the drought has meant we’ve hardly had any of the traditional pre-Dusi races to compare ourselves with the other top crews!”

The pair’s training for the three day clash started during their time together at Stellenbosch University however Gandar’s recent graduation and subsequent entrance into the working world has led to a change in their previous training regime.

“Last year was a good year for our training because we were at university together and we had time on our side!

“The vibe down at Stellies is also so chilled and the emphasis is on fun, which really suited us.

“I am in the job market now though, so training time is not that easy to organise!

Aside from having to continue their preparations alone in recent weeks, Gandar and Starr’s build-up received another untimely setback at the recent Hi-Q Challenge when Starr tripped over a metal stake in the ground and dislocated his shoulder.

“The Hi-Q Challenge wasn’t great for us because Muz (Starr) fell and hurt his shoulder.

“Maybe Muz’s shoulder injury is a blessing in disguise though because he can’t paddle right now so he is having to do more running.

“A low-level Dusi places more emphasis on the paddling, and that’s where Muz and I are strong, so if we can run well too then we are excited about our chances!” said Gandar.