Following a roller coast two months that was brought about through the unfortunate stabbing of up and coming paddling star Banetse Nkhoesa at his Shongweni home, he and Sbonelo Khwela have nailed down their intentions of taking on the 2016 FNB Dusi together despite the tough few months. 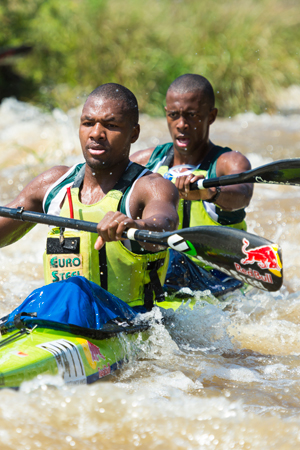 The stabbing, that occurred in the middle of December, has had a significant effect on Nkhoesa who is still in the process of regaining full use of his lung after it was punctured during the assault.

Despite the road to recovery being a long and intense one, Nkhoesa will be back in the boat with his Euro Steel partner and 2014 FNB Dusi Canoe Marathon winner Khwela as the pair look to pick up the pieces of their Dusi preparation.

“Our goals have changed dramatically recently and we have changed our mind sets towards the Dusi this year,” a relaxed Nkhoesa said at the Prime Human Performance Institute where he has spent much of his recovery. “We are now in a position that winning is probably not an option but we have said that if we are given an opportunity, we will take it!”

With a chance to win his first Dusi Canoe Marathon title all but gone, Nkhoesa three-day journey from Pietermaritzburg to Durban with Khwela will take on a new light.

“We have taken the pressure off ourselves and we just want to see how well we can do!”

For Khwela, it has been an equally tough period as he has found himself partnerless on not one but two occasions after his interim partner Nhlanhla Cele badly injured his shoulder in Johannesburg during the Euro Steel Highveld croc, leaving the defending K2 champion in limbo.

“It is great to have Banetse back even though he is still recovering from the stab wound and everything has changed for us!” Khwela mentioned.

“I am just glad that he is feeling good and ready to paddle.

“We are now just hoping to have as much fun as we can!”

Nkhoesa has been helped in principle by Dr. Kevin Subban at the Prime Human Performance Centre courtesy of his involvement in the KZN Department of Sport and Recreation backed Elite Athlete Development Programme and, with Subban’s wealth of experience, Khwela knows his paddling partner is in good hands.

“Having a person like Dr. Subban helping Banetse is incredible for him and he has helped him out so much since his incident which we are very grateful for!

“I am just really happy that I am able to get back into a boat with him.

“We will just take the race day by day until the finish,” a circumspect Khwela explained.

Despite being back in a boat with Nkhoesa, Khwela is still worried about a few things as the pair haven’t been able to practice their portaging together.

“I am just worried about our running; it is something that we haven’t been able to do so the portaging is going to be difficult.

“All of the other crews are starting to taper off with the Dusi under a month away but we are in the complete opposite position at the moment!” Khwela chuckled.

Out into the weekend we go! ⁠ ⁠ Keep up the wi

Tomorrow evening is the Stowell and Co Lance Park