Durban based Len Jenkins and Johannesburg’s Siseko Ntondini have confirmed they will continued their unlikely partnership at the 2016 FNB Dusi Canoe Marathon which takes place from 18-20 February, with many touting them as the potential upset combination in this year’s mix. 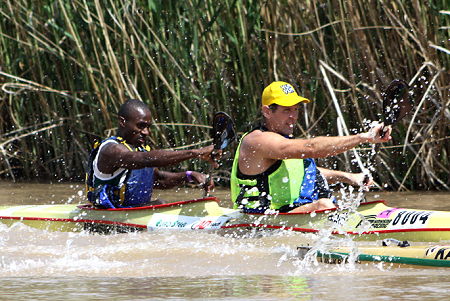 Having raced to third place at the 2015 Hansa Fish River Canoe Marathon – Ntondini becoming the first ever black paddler to achieve a podium finish at the Eastern Cape event – the ADreach/Euro Steel pair has been hard at work ahead of their determined FNB Dusi challenge.

Realising the importance of building the partnership ahead of the 120km, three day encounter, Ntondini has spent the past few weeks in Durban with Jenkins, something he feels has helped with his progress as an elite athlete tremendously.

“It has been good staying with Len at his home in Morningside!” described Ntondini. “There are a lot more paddlers in KZN and Durban which means I can now see where I am compared to the others almost every week.”

“I have learned so much from Len and have improved my skills a lot since I’ve been paddling with him.

“He has helped me with my paddling and my running a lot but mainly he has taught me how to win a race because he has such a good paddling head!” added the Soweto Canoe and Recreation Club product.

While the partnership’s success and resultant bond between the two even caught Jenkins somewhat by surprise, the one-of-a-kind paddling talent has embraced the situation wholeheartedly with many having been left dumbfounded by his sudden return from the paddling wilderness.

“Just how well Siseko and I have gotten along and combined in the boat has been a bit of a surprise for me, but it’s been really good!” described Jenkins.

“When I get home from a day’s work and maybe don’t really feel like going to train, with him staying with me I kind of now have to go get out there with him whereas when he was in Jo’burg, every second day was a rest day for me!” he chuckled.

Both Jenkins and Ntondini may still be non-committal regarding their chances of securing the 2016 FNB Dusi title however the pair are confident in their abilities and confirm that their build-up has gone well.

“We are hoping for a top five at least,” explained Ntondini. “It is going to be a very tough Dusi though because Lance (Kime) and Andy (Birkett) are going very well at the moment and Hank (McGregor) and Jasper (Mocké) and Bungee (Thulani Mbanjwa) and Ruby (Shaun Rubenstein) will also be strong too!”

“In training we’ve been chatting and recently I just pointed out the obvious – that we’ve actually got a lot of speed both on the water and on the portages!” added Jenkins.

“At the 50 Miler in December we managed to drop the other boats right off the start line and it took them half an hour to close the gap; that’s a lot of paddling!

“So we do realise that there is potential there and we’ve been training quite hard so hopefully we can go well at Dusi!”

Another factor in the ADreach/Euro Steel couple’s favour given the expected low water conditions due to the on-going drought that continues to plague KZN is their comparatively light weight.