Some much needed rainfall arrived in Pietermaritzburg this week giving many paddlers the peace of mind that the TWK Dash n Crash will go ahead as originally planned whilst the popular Campbell’s to Dusi Bridge on Sunday will be raced in more favourable conditions than originally expected. 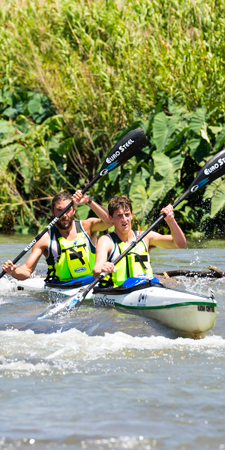 The eight kilometre TWK Dash n Crash hit-out on Saturday has both a K1 event in the morning and a K2 event in the afternoon taking the paddlers around Camps Drift then down the Msundusi River to the finish at the low-level bridge.

The race provides paddlers with a chance to race the opening stages of the Dusi route in typical race conditions, with a second chance over 25km on Sunday providing another chance to experience FNB Dusi race conditions and brush up on river skills.

With the drought having played havoc with the early Dusi season preparations many paddlers will see the trio of races as a gilt-edged opportunity to secure elusive Dusi proficiency points and qualifiers at the same time as practice on the river in conditions similar to those that can be expected from the FNB Dusi in three weeks’ time.

The seeding points on offer on Sundays Campbell’s Farm to Dusi Bridge race will be the main focus of a number of the top crews jockeying for a place on the front row of A batch for the three day race to Blue Lagoon.

The top crews should be out in force over the weekend with two of the ladies crews taking on the Msundusi River for the first time as Abby Solms reunites with the impressive Anna Kožíšková whilst the young and exciting pair of Jenna Ward and Hungarian marathon ace Vanda Kiszli making their river racing debut as a combination.

With the FNB Dusi just under three weeks away many of the top crews will go into hiding and start to keep their cards very close to their chests as they begin to taper off with the three-day epic approaching rapidly.

In between the two races, paddlers have been invited to a round table discussion on the FNB Dusi rules, providing an opportunity to9 engage with the race officials and seek clarity on specific aspects of the race course.

Sunday’s action could provide a much-needed benchmark for the elite boats, particularly as the race includes the tough 5km Guinea Fowl portage, as they sum up the competition and where their form is going into the final few weeks before the FNB Dusi.

Despite their recent problems Sbonelo Khwela and Banetse Nkhoesa will be on the start line for the Campbell’s to Dusi Bridge but they are well aware that their preparations are still in their infancy after the set-back of Nkhoesa’s December stab wound.

With the dangerous crew of Khwela and Nkhoesa seemingly ruled out of the title race for the 2016 FNB Dusi it appears that there is a potential spot on the podium up for the taking however it is going to be interesting to see which crew puts their hand up to fill the void left by the Shongweni based duo.

"Is that them?"⁠ ⁠ "What colour hat were they

It isn't easy, because then it wouldn't be the Dus

One of those unbeatable feelings! ❄️💧☀️

Cheers to good times on the river!⁠⁠ ⁠⁠ Ha

When the weekend is over but you're still smiling!

You could run, or you could take your time and enj

Dreaming of those warm days on the river!☀️⁠

Alright, back to work all of you!⁠ ⁠ You know

"Now that wasn't there when we set off this mornin

A #MyLifeDusi journey is often a mix of ups and (u