As the number of entries grow for the 2016 FNB Dusi Canoe Marathon taking place from 18 to 20 February, the race has taken a bold step to address the impact of the drought on the province by providing water-threatened residents in the Msundusi and Mngeni valleys with means to become water-sufficient. 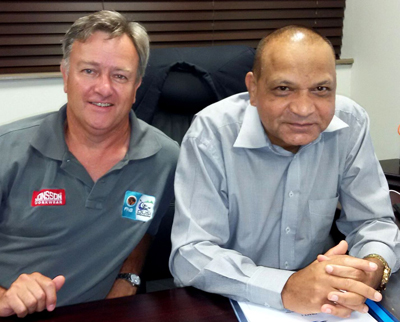 The pioneering project involves the creation of a new fundraising initiative within the event, the FNB Dusi Drought Relief Initiative, which will benefit from the auction of places in the FNB Dusi Charity Batch, sharing the funds generated with the two existing beneficiaries, the Dusi Mngeni Conservation Trust (DUCT) and the Valley Chiefs Fund.

The FNB Dusi Drought Relief Initiative will finance the purchase and installation of water tanks, and appropriate guttering and piping at community centres such as schools, clinics, crèches and police stations that will allow local residents access to clean drinking water harvested from summer rainfalls.

“It is one of the great ironies of this drought that we are seriously depleted of drinking water, yet we are getting fairly regular rainstorms,” said Dusi General Manager Brett Austen Smith.

“Local communities in the two valleys that we race through rely on the rivers for washing and cooking water, and piped water for potable drinking water. Both are scarce commodities at the moment. We decided that the event would be a fantastic platform to make a difference to people’s lives, especially those people who we interact with so closely during the racing.

“The issue whether our canoeists will have enough water to paddle on is insignificant when compared to the serious effects that the drought is having on the everyday lives of people who live in these valleys. This is a great way for paddlers to make a real, meaningful difference to their lives,” he added.

FNB Business CEO, Mike Vacy-Lyle, said “Although the water in the river is central to the FNB Dusi Canoe Marathon, the recreational needs of the athletes are secondary to the needs of local communities whose access to clean drinking water is under threat due to the current drought.”

“The FNB Dusi Drought Relief Initiative has therefore been set up to help the community overcome the dwindling supply of potable water in the short term. Our long term plan hinges on providing sustainable local solutions for communities that don’t have extensive water supply infrastructure,” added Vacy-Lyle.

The plan to extend the beneficiaries of the FNB Dusi Charity Batch from two to three has been welcomed by the existing charities involved, who have added their support to the pioneering water harvesting scheme driven by the FNB Dusi Drought Relief Initiative.