With less than three weeks to go to the 2016 FNB Dusi Canoe Marathon, Thulani Mbanjwa and Shaun Rubenstein’s victories in both the weekend’s seeding races have given pundits their first clue as to just what kind of form the top five hopefuls are in ahead of the iconic encounter from 18-20 February. 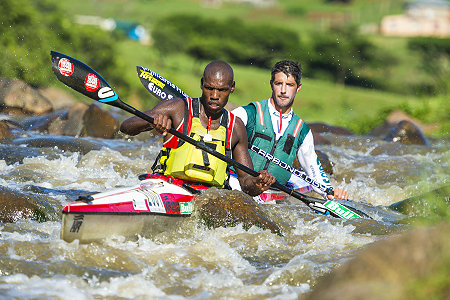 Saturday’s TWK Dash n Crash from Camps Drift – the start of the FNB Dusi route – down to just above Woodhouse Road’s low level bridge gave paddlers the opportunity to explore the opening few kilometers of the FNB Dusi route, a rarity this summer due to the current drought.

Sunday’s 25km Campbell’s to Dusi Bridge then covered much of the balance of the FNB Dusi’s first day’s course and with searing temperatures and low water levels, was a testing outing for the large field of eager crews.

With Mbanjwa based near Nagle Dam in KwaZulu-Natal and Rubenstein in Cape Town, the Build it/Euro Steel pair saw the double opportunity as a non-negotiable piece to their build-up puzzle as they looked to hone their partnership ahead of the 120km, three day adventure.

“We decided not to hold anything back this weekend and look to do our best!” confirmed Mbanjwa.

“We’ve only raced together four times previously so we needed to go out there, spend some time in the boat together and push hard.

“At Campbell’s to Dusi Bridge we managed to open a forty second gap over Len (Jenkins) and Siseko (Ntondini) by the Guinea Fowl put-in but they caught us again on the water and by Maze Rapid we were together again.

“They then got stuck and we got through and managed to get away until the finish,” he added.

Despite being joined on the weekend’s start lines by some their fellow 2016 FNB Dusi top contenders – the Campbell’s to Dusi Bridge race in particular – and securing confidence boosting successes, the pair were left none the wiser as to where they fit into the pecking order after many of their rivals kept their cards close to their chest throughout.

“We weren’t worried about others this weekend; we know they are going well,” explained Mbanjwa.

“It just would have been nice to have had everyone else racing hard so we could see where we are compared to them.

“A lot of the guys were just chilling though.”

The Build it/Euro Steel pair will however still be pleased that their weekend’s performances helped confirm the work they have put in in training individually has paid off.

“I think I’m in good shape and Shaun (Rubenstein) has lost seven kilograms since the Umpetha Challenge in November which has already made a big difference, especially on the portages!

“Shaun always has the power in the water but now that he is a bit lighter, he is able to run well too.”

The low river levels and soaring temperatures made for difficult racing conditions, but left another positive the pair will take away from this past weekend.

“Dash n Crash wasn’t too low but Campbell’s to Dusi Bridge was very low,” said Mbanjwa. “It was good to get some practise on a low river though; it will help prepare us for Dusi, especially for Day Two which I think will be quite low even for Dusi!”

While Mbanjwa may have stood on the top step of the FNB Dusi podium previously and Shaun Rubenstein is a former Marathon World Champion, the pair are reluctant to suggest they will be right at the front of the FNB Dusi’s men’s title race in 2016.

The talented and experienced athletes are however eager to take on one of the finest K2 Dusi fields the race has enjoyed in many years.

“We’re hoping to have a good race together at Dusi and hopefully we can be in the top five,” confirmed Mbanjwa. “A podium is going to be very, very tough!”

“Even though Banetse (Nkhoesa) had his horrible incident in December, I don’t think he and Sbonelo have lost that much fitness and at the moment they are playing games with everyone else and I’m sure will still be very strong for Dusi!”