As the thousands of paddlers preparing for the 2016 FNB Dusi Canoe Marathon move into the final stages of their build-up, 42 FNB Dusi veteran Rob Bourne-Lange is looking forward to the three-day challenge which is expected to resemble the challenges of the 70s and 80s. 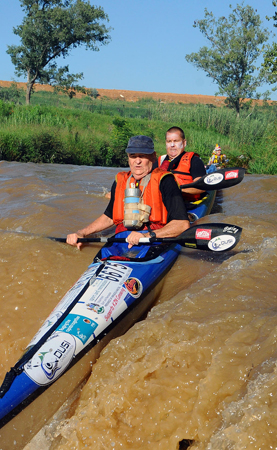 As the drought tightens its grip on KwaZulu-Natal, many are concerned that the 2016 Dusi will be tougher than it has been in recent years however Bourne-Lange is glad that the majority of the field will have to tackle a ‘typical’ early Dusi.

“Most of the modern day paddlers would never have experienced something like we had in the past,” the 73 year-old said. “We have been really spoilt over the past few years and this year I think we are going to see some very different conditions!”

The race has always had the mantra that it is the ‘Ultimate Canoeing Challenge’ and Bourne-Lange echoes these sentiments when he reminisces about the Dusi’s of the past.

“You always just took on the Dusi how you found it. That was the attitude that was instilled in us early and I think that that still rings true and will be very evident this year.

“Back in the past our boats were not as robust and we didn’t have Kevlar so we did a lot more portaging as we didn’t want to keep bumping down from rock to rock.

“I’ve got on in years now though so the new designs are welcome to us guys who won’t be running as much as we used to!” he chuckled.

Equipment is an area of paddling that has continued to evolve over the years as manufacturers look to give paddlers as much of an advantage as possible.

Bourne-Lange believes that enjoying his three days on the river rather than racing is of utmost importance.

“Over the years, from my racing days to the recent Dusis, I have raced a number of different designs however this year we are going to return to our trusty, broad-based Accord,” laughed Bourne-Lange.

“If we finish 45 minutes later than we could have because we are in a different boat then so be it – we are not too concerned!”

As Bourne-Lange lines up for his 43rd Dusi Canoe Marathon, his partner Chris Watts is preparing for his 37th attempt at completing the three-day journey.

With a wealth of experience between the two, the pair understand the strains and stresses of the race better than most.

“There are close to 80 Dusi’s between the two of us and we have done ten Dusi’s together so we know each other well and understand the race fairly well.

“We have also done 30 Umko’s together so our partnership is a good one and something I always look forward to!,” he stated.

Having seen the river in all varying conditions, Bourne-Lange singles out a few editions that he remembers fondly.

“My first race was very significant as we were young and in a double and myself and my partner ended up coming fourth.

“Having my parents around back then also made that race very special!

“1976 was another race that is quite vivid in my memory because the river was probably the fullest I have ever seen and I managed to get through the whole race without having one swim in my K1 so that was a great race for me!

“One of the most significant races was when I was able to do the race with my daughter,” he added.

The FNB Dusi is unique in that it creates relationships and tests each individual differently throughout.

The end result is often the same though, with many vowing to return.

“The race just gets into your blood!

“The camaraderie, the test as well as the fact that it keeps you fit and healthy keeps me coming back,” he added fondly.