The Soweto Canoe and Recreation Club have developed into a club to be reckoned with in South African paddling circles and the team from Gauteng will once again provide a fair percentage of the elite paddlers tackling the 2016 FNB Dusi Canoe Marathon from 18-20 February. 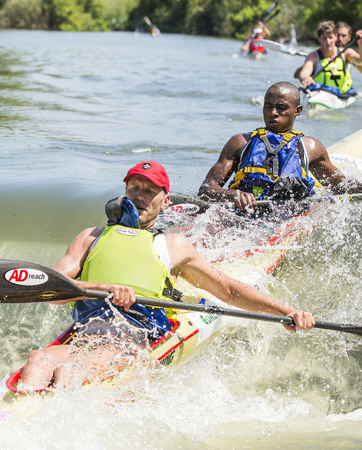 One of the shining lights of the development programme from Soweto has been Siseko Ntondini. The young paddler has grown as a paddler tremendously of late and with the support of the programme as well as the partnership that he has struck with paddling veteran Len Jenkins, Ntondini is hopeful that they can push for a podium spot.

Following an impressive second place performance at the recent Campbell’s to Dusi Bridge race, the pair have secured themselves a place on one of the front two rows of the FNB Dusi’s prestigious A Batch when the race starts at Camps Drift in Pietermaritzburg.

Although this will not be an individual effort, Ntondini who finished 21st in last year’s Dusi, will be looking to change his fortune this year by flying the SCARC flag high in his attempt to follow in the footsteps of the talented Loveday Zondi by representing Soweto’s paddlers in the top ten.

SCARC has made great strides in the FNB Dusi Canoe Marathon race in recent years with its members’ regular top performances having earned much respect from the paddling community of South Africa.

Mike Vacy-Lyle, CEO of FNB Business, says “SCARC is a great inspiration to young people, sport-men and women across the country. This team has proven that regardless of your background, with hard work, commitment and dedication, almost anything is achievable with the right mind-set”.

“Eleven years ago, when SCARC was first established, with the aim of providing development opportunities to underprivileged young people from Soweto, no one would have thought that a team of youngsters predominantly from the Elias Motswaledi informal settlement, would be competing amongst the cream of the crop in canoe paddling.”

Vacy-Lyle adds, “Our sponsorship of SCARC serves as a demonstration of our commitment to youth development and this team has great potential to develop and change the lives of young South Africans.”

While Ntondini’s partnership with Jenkins represents SCARC’s most promising chance of securing a 2016 FNB Dusi podium, Zondi – an individual who deserves much praise and recognition for inspiring the SCARC team to reach the heights it has – and his partnership with Kwanda Mhlophe from KZN may well produce a second top ten result for the team.

Both Zondi, who famously became the first black paddler to finish on the Dusi podium in 2005 followed by an impressive second place finish at the Non-Stop Dusi in 2013, and Mhlophe, who has already enjoyed two fourth place finishes at the FNB Dusi, bring great pedigree to the partnership and a wealth of knowledge of the uMsundusi and uMngeni valleys through which the race journeys.

The young Under-23 pair of Thando Ngamlana and Siyabonga Tyiki are another SCARC pair set to team up for the 2016 event and after the former having finished the 2014 Dusi Canoe Marathon in eighth place overall with Zondi, the young duo will be keenly eying a spot in the Under 23 top five.