The remarkable running abilities and rapidly developing river skills of the Computershare Change a Life Academy’s canoeists has seen the Valley of a Thousand Hills competitors become hot property ahead of this year’s FNB Dusi Canoe Marathon which takes place from 18-20 February. 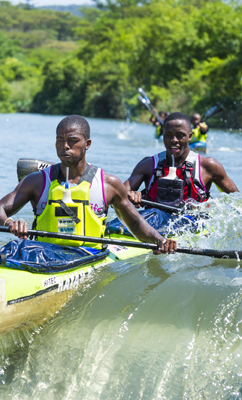 The academy’s history of a strong presence within the event’s top 20 and throughout the junior and Under-23 age groups is set to be somewhat diluted in 2016 after numerous Change a Life ‘Zulus’ received requests from non-academy paddlers to team up for this year’s FNB Dusi.

“We’ve got as many as five or six of our Zulus who have formed partnerships with guys from outside of our academy for this year’s Dusi,” confirmed ‘Dusi Duke’ and academy founder, Martin Dreyer.

“A lot of guys from outside the Change a Life family are now asking our guys to do Dusi with them because of what our guys can bring to a partnership!” he added.

While at first it was tempting to look to keep the academy’s talent in-house, Dreyer soon realized the growth potential pairing with paddlers from outside the CAL talent pool could bring to his athletes.

“We first experienced this phenomenon in our mountain biking setup because of their regular success on the local circuit and now it is happening to our paddlers too.

“Initially it was a bit of a difficult one to swallow as our gut feel was to try to keep the Change a Life family together.

“I soon realized though that this type of thing is good for our guys’ development as it provides them with important life experiences that come from interacting and competing with someone from a different background to yours.

“It has also been such a compliment to just how far our team has come since we first started; our academy has developed to such a high level that our guys are now being outsourced!

“It’s time for us to spread the love while our guys have got to experience everything an continue to grow as individuals.

“We’ve given them their wings, now we’ve got to let them fly!” said Dreyer proudly.

Dreyer’s 2007 FNB Dusi winning partner and Computershare Change a Life ambassador Thulani Mbanjwa (Build it/Williams Hunt) is one of the academy’s bigger name to be pairing up with a ‘foreign’ partner as he and former Olympian and Marathon World Champion Shaun Rubenstein look to challenge for a podium place in the highly competitive men’s race.

Former FNB Dusi fourth place finisher and embedded Computershare Change a Life Academy member Kwanda Mhlophe will take on the challenge with good friend and former Valley of a Thousand Hills paddler, now living in Johannesburg, Loveday Zondi (SCARC) with the pair eyeing out yet another top 10 finish.

“Mhlonishwa Hlongwane, who finished eighth in last year’s K1 Dusi, and Nqobile Makhanya were another strong combination that were looking to do well together,” explained Dreyer.

“About a month ago Mhlonishwa unfortunately had to pull out of their pairing because the dive course that he started with the Sharks Board shortly after last year’s Dusi, saw him posted at Langebaan in the Western Cape and unable to take part in this year’s race.

“Nqobile has however now managed to link up with Irvin Dixon for Dusi.”

Exciting junior talent Mpilo Zondi is another set to compete with an outsider at the 120km, three day event after he and Fish Hoek based surfski and marathon sensation Mark Keeling confirmed their combination.

A strong showing at the StaminaGro 50 Miler in December suggests the young pair will be a major force to be reckoned with in the U18 boys race while also outlining another interesting step in the academy’s progression.

“It has been great to see our guys not only being invited by others to paddle with them, but they are in fact now being asked to drive their boats,” explained Dreyer.

“It’s nice to see our guys standing on their own two feet and taking ownership of the partnership.”

The Computershare Change a Life Acamdemy’s stars however aren’t all part of ‘mixed’ partnerships with many still combining to form exciting all-CAL crews.

Euro Steel/Red Bull sponsored athlete and Change a Life product Sbonelo Khwela had endured a dramatic build up to this year’s FNB Dusi with partner and fellow CAL star Banetse Nkhoesa, with the pair eyeing a top three finish.

Lucas Mthalane and Sipho Canham, Nhlahla Cele and Mthobisi Cele, Mmeli Cele and Khumbulani Nzimande, Thomas Ngidi and Siboniso Shozi as well as Thabani Msiya and Msawenkosi Mtolo are also all eager to leave their mark on this year’s race amongst the senior and Under-23 ranks.

Skhumbuzo Ngidi and Nkosi Cele, Mzamo Zondi and Siyanda Gwamande together with Nkosi Mabaso and Jabulani Gwamande will also be looking to fly the Change a Life flag high.