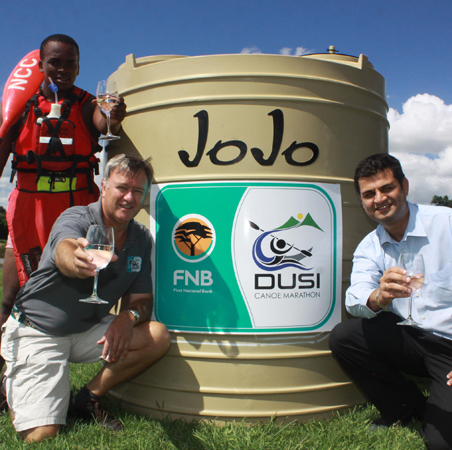 FNB has announced that it will match the proceeds from the sale of places in the Charity Batch rand for rand, doubling the benefit to the three beneficiaries, the FNB Dusi Drought Relief Initiative, Dusi uMngeni Conservation Trust (DUCT) and the FNB Dusi Valley Chiefs Fund.

The proceeds from the Charity Batch action will now be split three ways to accommodate the FNB Dusi Drought Relief Initiative which aims to enable local communities to become more water-sufficient through the installation of water tanks, in collaboration with Jojo Tanks.

FNB Business CEO, Mike Vacy-Lyle, said, “The concept of the FNB Dusi Drought Relief Initiative which leaves a lasting and sustainable footprint in the valleys that the race passes through has been warmly received.”

“Our aim is to extend the reach of the project as far as possible and impact on the lives of as many local communities as we can.”

“There wasn’t a moment’s hesitation from either of the two existing beneficiaries of the Charity Batch auction when we mooted the idea of the FNB Dusi Drought Relief Initiative, as we all see the importance of contributing to alleviating the effects of the drought.

“This latest gesture from FNB not only ensures that the two existing beneficiaries aren’t compromised by the addition of the third beneficiary, but it dramatically increases the capacity of the race to make a meaningful difference to the lives of residents of the valleys that host this race every year but enabling us to install more tanks into more communities.

Austen Smith said the race was in consultation with local tribal authorities to determine the optimal locations for the installation of the tanks, and had also received the support of a local company to install appropriate guttering to allow rainfall to be collected from the roofs of centrally located public buildings.