Pietermaritzburg resident Nigel Tatham will be taking on his 20th FNB Dusi Canoe Marathon in 2016 with a plethora of silver medals under his belt however that elusive gold was something that he could never add to his collection over the years. 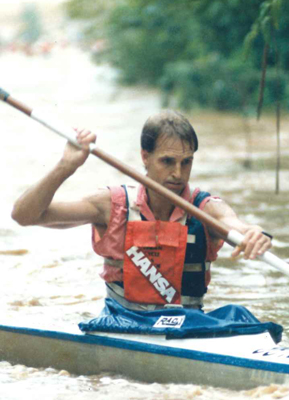 Breaking into that top ten of the Dusi was something Tatham strived for in his younger days as a competitive Dusi paddler however he was never able to breach the gap between the gold and silver medal.

“In those days a silver was from eleventh to twentieth,” Tatham mentioned. “I think I got ten silvers which included a best finish of twelfth and every position from there to nineteenth as well as three fifteenths!”

“Getting a gold medal was the goal for a number of years when I was racing competitively with some really good K2 partners however I never had a trouble free K2 race!

“My best results always came in a K1.”

Tatham came close to a gold medal on a number of occasions but the 59-year old knew that his best opportunity came in the late 80s before he saw his dream slip away on the waters going into Durban.

“The closest I came was probably in 1989, when I got onto the flat water into Durban in ninth position, but I had a number of strong paddlers on my tail and I wasn’t able to hold them off.

“I was always more of a runner than a paddler,” he added.

Narrowly missing out on that elusive gold medal could have proved to be a frustrating feeling for Tatham however he took it all in his stride and felt that actually taking part in the race was of more importance than the medal at the end.

“I was never really thinking hard about the medals, even though it would have been nice at the time.

“I just thought that in the overall scheme of things the medal is fairly insignificant,” stated Tatham.

Tatham will take on the 2016 adventure with his brother Doug, who has completed 27 Dusi’s and too could not break through into the exclusive group of gold medal winners.

“Doug persuaded me to come out of retirement two years ago and I have enjoyed doing the race on a very social basis since!

“Doug has done many more Dusis than me – I think that this year is his 28th with his best result also being a twelfth place finish.

“There was a friendly rivalry between us, probably more so when we were each paddling K2s with different partners.

“In one of the K1 races, Doug and I finished each day within seconds of each other – on the final day he pulled Keith Ellerker and I all the way into Blue Lagoon then got caught on a sand bank just before the finish, allowing Keith and I to beat him!” he reminisced.

The ‘Dusi Fever’ griped Tatham many years ago which, despite a brief stint in retirement, has kept a hold of him with the Valley of a Thousand Hills providing him with many memories that are more important than the medals that he has won.

“I probably derived more pleasure from the many training trips we did in the valley than from the race itself.

“I spent many hours tripping with good friends enjoying the spectacular beauty of the valley, and we acquired a fairly intimate knowledge of the river.

“I have never set much store by the number of events a person has completed, and I certainly didn’t think I would still be toiling down to Durban in my late 50s!” he stated.