A powerful European contingent of no fewer than three current ICF Canoe Marathon World Champions and a former silver medalist will add yet another dimension to the already mouth-watering 2016 FNB Dusi Canoe Marathon mix when the race takes place from 18-20 February. 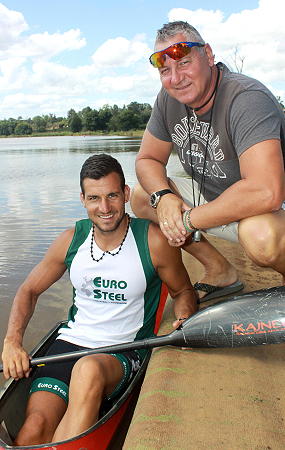 Widely regarded as the ‘Ultimate Canoe Challenge’, the Dusi has attracted top paddling talent from around the world in recent years however 2016 may yet see the most fruitful return by foreign paddlers as current K2 men’s world champ Adrian Boros and U23 women’s K1 world champ Vanda Kiszli (both Hungary) as well as Czech Republic twins Jakub Adam and Anna Kožíšková take on the challenge.

Returning to the 120km, three day journey through the uMsundusi and uMngeni River valleys for a third time after his debut in 2014 with fellow Hungarian Gabor Mathe and 31st place K1 effort in 2015, Boros (Euro Steel) is eager to tackle the iconic event once more, this time with Eastern Cape ace Greg Louw.

“I think the Dusi is the most important race in the whole world!” said an enthusiastic Boros. “I’m very excited for this year’s race and I want to push as hard as I can!”

“The first time was very difficult but last year was much better and this year I have Greg Louw as my partner, so it should be good.

“There is very good competition here at the Dusi and I think it will help me to go faster on flat water as well!” added the Euro Steel athlete.

Despite having spent precious little time in the boat together and Boros’ minimal exposure to the requirements of running with a boat on the shoulder, the flat water marathon star is confident the pair will put in a strong performance.

“We haven’t been able to train together much, only four times together so far, but Greg is coming to Pietermaritzburg this weekend and we’ll try to spend some more time training together next week before the race starts on Thursday.

“I think Greg (Louw) is a good driver and I hope we can finish in the top ten!

Having spent much time racing the South African circuit over the past four years, near-household names Adam and Kožíšková also bring significant pedigree to this year’s FNB Dusi tussle.

While Adam has a Marathon Word Champs runners-up medal to his name and Kožíšková famously claimed her maiden world title at last year’s global showcase, the pair also have proven Dusi track records.

Adam, paddling with 2010 and 2012 Dusi winner Jason Graham this year, raced to third place with Cameron Schoeman in 2014 while Kožíšková claimed a narrow second place with Abby Solms in the women’s race in the same year, a feat the Euro Steel pair will hope to improve on even further in 2016.

“I will sit in the back and Jason (Graham) will drive because he knows the river very well!” explained Adam.

“Things seem to be going well so far, except for Jason getting a bit sick at the Drak Challenge which meant he couldn’t train and so I worked on my running then!”

While Graham and Adam will hope to challenge some the pre-race favourites for a coveted top five finish, Solms and Kožíšková head into this year’s race as clear women’s favourites.

Solms and Kožíšková are however likely to be pushed by fellow top women’s contenders Kiszli and her Techpro Racing team mate Jenna Ward.