While the current drought has many predicting ‘old school’ type conditions for this year’s FNB Dusi Canoe Marathon when the race takes place from 18-20 February, a pair who will be certain of the challenge being a ‘blast from the past’ are canvas boat entrants Andrew Booth and Diana Rietz. 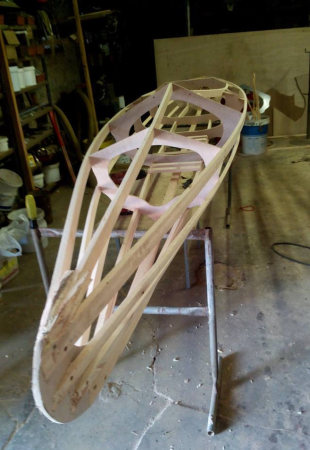 The veteran paddling pair of thirteen and twelve Dusi finishes respectively, will tackle this year’s 120km race from Pietermaritzburg to Durban in old fashioned canvas canoes similar to those used by the founder of the race, the late Dr. Ian Player, and his fellow Dusi pioneers back in the early 50s.

Booth and Rietz have opted to return to wooden shelled craft with stretched canvas over –the forerunner in boat design to the fiberglass, Kevlar and now even plastic boats used today – in an attempt to raise much needed funds for the Duzi Umgeni Conservation Trust (DUCT), one of three official charities of the 2016 FNB Dusi.

“With the recent drought, water has come into sharp focus,” explained Booth, an employee of DUCT’s from 2008-2010 and keen environmental enthusiast.

“But, if the truth be told, as South African’s, this should be one of our main focuses perennially as the impact water security will have on the generations to come is massive!

While DUCT will receive one third of all money raised by the FNB Dusi’s charity batch, Booth believes more can be done to support the programmes of this important initiative.

“I know that organisations like DUCT struggle for core funding to pay salaries and cover running costs so Di and I hope that by paddling this year’s FNB Dusi Canoe Marathon in an unconventional way, we can draw attention to DUCT’s work and raise funds!”

While Rietz became one of two women to join the annual Canvas Dusi for the first time ever in December 2015, the drought and subsequent lack of flow out of Inanda Dam prevented the 22-strong contingent from paddling from the dam to the FNB Dusi finish venue at Blue Lagoon.

Therefore, should Rietz successfully tackle this year’s FNB Dusi in her canvas craft, she will become the first women ever to paddle the full, modern day Dusi course in a traditional canvas canoe.

“As the FNB Dusi Canoe Marathon gets closer, the anticipation of three days of exciting adventure is mounting,” said Rietz.

“On top of that, doing it a canvas boat and raising funds for DUCT is going to make it an extra special one!” she added.

The pair, under the guidance of paddling stalwarts Anton Venter and Hugh Raw, have been hard at work building their boats for months ahead of next week’s race start.

Raw, who draws great pleasure from building boats, will also double as the crew’s seconding team on race day.

“Should anything go wrong during the race, which hopefully it doesn’t, and a boat is damaged, we will be in very experienced hands!” added Rietz appreciatively.

Anyone wishing to support the pair’s adventure can do so by pledging a contribution to their DUCT fund raising efforts.

To do so, visit www.duct.org.za and follow the steps of depositing a donation directly into their bank account. Donors are asked to use their initial and surname followed by the code word “CANVAS” as a reference.