Taking on the 2016 FNB Dusi Canoe Marathon in a K3 could prove to be a daunting task given the forecast low river levels however the Evered-Hall trio of grandfather Tony, father Mark and daughter Sarah are planning on taking it in their stride as they join one other all-family K3 on the three-day adventure starting Camps Drift in Pietermaritzburg from 18-20 February. 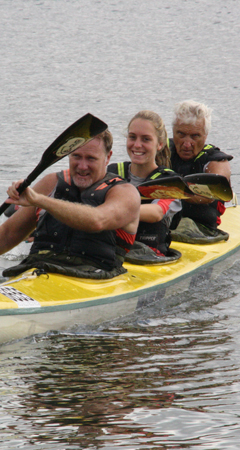 With sights set on becoming the first grandfather-father-daughter trio to complete the ‘Ultimate Canoe Challenge’, they could well have achieved the feat in 2015 however a strict age race rule prevented them from writing history.

“We were two days out from the Dusi last year when Brett Austen Smith phoned us to tell us that unfortunately we couldn’t race,” Dusi veteran Mark Evered-Hall mentioned.

“It was obviously a disappointment for us but we respected the race ruling, put it on ice for a year and we are just really excited to be able to race together this year!”

As the competitive field thins out, the paddlers that make the Dusi special come to the fore on their journey from Pietermaritzburg to Durban and Evered-Hall, who is doing his 23rd pilgrimage this year, understands the importance of taking in the whole experience.

“We have had a great build-up to the race and my father and I understand how difficult this year’s race is going to be but we just want to have as much fun as we can getting from the start to the finish.

“It would be very different if we were racing, because the top paddlers are going to have some interesting decisions to make in the low conditions, but we just want to have the best race we can have and I want Sarah to enjoy her first experience of the Dusi Valley,” an excited Evered-Hall added.

Despite having to wait an extra year for the opportunity to take on the FNB Dusi, the Durban North College school girl was determined to take on the challenge and her father was pleased when the 16 year-old committed to the 2016 event.

“I always wanted my kids to do the Dusi but I was obviously never going to force them to do it.

“When Sarah came to me to ask me if I would paddle it with her I was incredibly proud!

“We did the same thing with my eldest son, Joshua, so it seems that the Dusi runs through this family’s veins, which I am really happy about,” chuckled Evered-Hall.

Tony, who is now 72, appears to be ready for the three-day challenge as he lines up his 15th charge at the FNB Dusi.

“My dad is like a piece of biltong,” Evered-Hall added in jest. “He is still really strong and mentally really tough so he will definitely be ready for the race and he’s looking forward to racing with his granddaughter.”

From when his children were born, Evered-Hall has wanted to re-create a specific moment and in 2016 he feels that he can complete his dream.

“When both of my kids were born I had a photo with them at the finish in Durban and I have been able to do it with Josh and now I am really looking forward to being able to have a photo with Sarah in her paddling gear.

“It is such a special event for our family and now that Sarah will be taking part in her first, it will make me immensely proud to say that I have been able to do the race with both of my children,” beamed an excited Evered-Hall.

The race has processed a total of four K3 entries ahead of the 2016 FNB Dusi Canoe Marathon with another all-family crew joining the Evered-Halls in taking on the challenge.

The experienced Symington duo of Wayne and Des will be joined by sixteen year-old Elijah in their boat as he takes on his first FNB Dusi Canoe Marathon this year.

While not family members, Hugh Cocksedge and Debbie Bothma will join elite racer and Valley of a Thousand resident Nhlanhla Cele (Computershare Change a Life Academy) in their three-seater craft while Cassia Forsyth, Jim Taylor and Roland Heuff will also combine in the fourth K3 tackling this year’s race.