The path that has led to the start of the FNB Dusi Canoe Marathon on Thursday, 18 February features more intriguing twists and turns than the fabled route up the Nqumeni Hill portage and more drama than the 65 year-old race usually dishes up before the Carbineer’s cannon is fired at the start at Camps Drift. 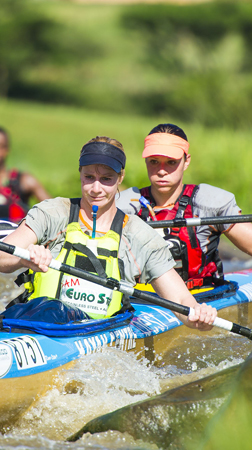 The complexity started when 2014 K2 champions Andy Birkett and Sbonelo Khwela surprisingly parted ways as Khwela opted to give the shot at the 2016 title to his young Shongweni protégée Banetse Nkhoesa, leaving Birkett in the market for a partner ahead of his sixth Dusi title bid.

He was fortunate that 2013 K1 winner Lance Kime returned from his travels abroad in time to be able to commit to the partnership and the pair, like most of the male and female contender crews, was soon snapped up by the newly formed Euro Steel team.

Khwela and the 22 year-old Nkhoesa started the summer season like a house on fire, sweeping everything before them, laying down a marker with an emphatic win in the first serious Dusi-style race, the Umpetha Challenge over the first 18km of the FNB Dusi course.

While they were shaded by Euro Steel’s Kime and Birkett in a needle Ozzie Gladwin Canoe Marathon encounter – a maiden win for Kime and Birkett in their first serious race together – Red Bull athlete Khwela and Computershare Change A Life Academy product Nkhoesa were being talked up as the crew to beat in the FNB Dusi in mid-February.

That however all changed just before Christmas when Nkhoesa was the victim of a brutal knife attack in his home deep in the Shongweni Valley that left him with a nasty stab wound in his shoulder, and more importantly, with a punctured left lung.

With Nkhoesa hospitalized, a jittery Khwela scrambled to find a replacement and was fortunate to be able to conscript the more than able and willing Nhlanhla Cele. That was however short lived as Cele suffered a badly dislocated shoulder in the pre-Dusi race on the Euro Steel Highveld Croc, leaving the exasperated Khwela high and dry with the FNB Dusi six weeks away.

“I don’t know what I have done to anger my ancestors,” said Khwela at the time. “Maybe I have to go and slaughter a goat…”

Miraculously though, Nkhoesa re-entered the frame thanks to the tireless work by the team of medical experts, led by Olympic team physician Dr.Kevin Subban, working with the Elite Athlete Development Programme at Prime Human Performance Institute.

Suddenly the Shongweni dream team was back on track, with Nkhoesa using all his youthful determination and enthusiasm to fast track his recovery.

Latest tests show that the injured lung has not fully recovered, but that is clearly not going to stop the youngster from his shot at Dusi glory.

Conspicuous by their absence at many summer races, the 2014 runner-up crew of six time Marathon World Champion Hank McGregor and Jasper Mocké (Euro Steel/Mocké Paddling) have flown under the radar, bar their solid win the StaminaGro 50 Miler in early December, where they edged out most of the Dusi title contenders.

The duo, K2 gold and silver medallists at the last two Marathon World Championships, are the most established crew within the hotly contested title race and, based on how much weight the two athletes have shed during their Dusi training, have clearly been putting in the hard yards.

The enigma Len Jenkins has elected to further his Hansa Fish partnership with Soweto based Siseko Ntondini, eleven years his junior, and the ADreach/Euro Steel duo will bring a distinct wildcard element to the sharp end of the race.

They will probably find themselves gunnel-to-gunnel with another former Dusi winner Thulani Mbanjwa and Capetonian Shaun Rubenstein, another crew that pools massive individual talent into a boat untested in the heat of battle.

Lurking in the wings are the likes of the potent Maties pairing of Owen Gandar and Murray Starr (Kayak Centre/Starsky) and Under-23 brothers Alan and Andrew Houston (USN).

The women’s race has a very different complexion.

Six time runner-up Abby Solms can be excited about the prospect of finally bagging the country’s most famous canoeing title after long being condemned to a bridesmaid role, particularly as she has reunited with the Czech Republic pocket dynamo Anna Kožíšková, riding the crest of a wave since toppling the legendary Renata Csay at the World Marathon Champions in Hungary last year.

The pair will be tested on the portages and in the rocky rapids by several classy female crews including the Techpro Racing pair of Durbanite Jenna Ward and Hungary’s Under-23 Marathon World Champion Vanda Kiszli as well as the irrepressible Euro Steel juniors Cana Peek and Kyeta Purchase, seeking to make a statement about the future of ladies canoeing by grabbing a spot on the overall women’s podium.