This year’s FNB Dusi Canoe Marathon gets underway on Thursday, 18 February and the battle for the men’s Under-23 crown threatens to be as fascinating as the race for the overall spoils when the country’s top stars of tomorrow go head-to-head from Camps Drift, Pietermaritzburg to Durban’s Blue Lagoon. 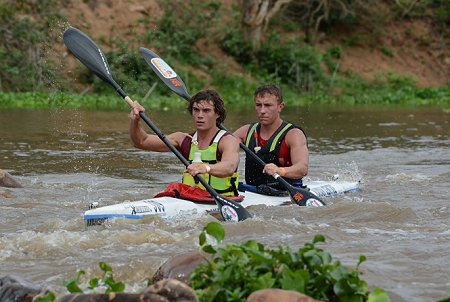 Techpro Racing’s Damon Stamp and Louis Hattingh are eager to take up the challenge of overcoming USN duo Alan and Andrew Houston while Computershare Change a Life Academy’s Mmeli Cele and Khumbulani Nzimande as well as SCARC’s Thando Ngamlana and Siyabonga Tyiki will also have a close eye on a podium finish.

“Hopefully we can win the Under-23 title and to finish in the top ten overall would also be great!” explained a determined Hattingh.

“Damon (Stamp) finished eleventh two years ago so he wants to improve on that result whereas for me, this is my first Dusi ever, so I have no idea what to really expect!” he added.

Despite Hattingh’s lack of Dusi experience due to his canoe sprint and flat water marathon focuses, his power on the water complements Stamp’s river knowledge and running strength well.

“Damon will definitely be driving as he is a way better driver than me; I will just look to follow, that’s my only job!” chuckled Hattingh.

“Until now we hadn’t paddled together since the Hansa Fish we did together when we were still Under-16 but after Damon asked me to do Dusi with him, we combined really well again right from the start!

“Damon had to go back to Stellenbosch for university at the start of the year but by then we’d done most of our long sessions in the K2 together and quite a few runs too so I don’t think that will affect us too much at all.”

Stamp and Hattingh claimed a confidence-boosting win at the Hi-Q Challenge, a flat water Dusi seeding race at Albert Falls in January, where they managed to outsprint fellow Under-23 title hopefuls, the Houston brothers.

“It was great to win the Hi-Q Challenge and 50 Miler went well for us in December too,” said Hattingh.

“The Houstons really run well and I’m more of a paddler so it will be interesting to see how things unfold at Dusi.

“There also isn’t much of a difference in our boats’ weights so the low water level won’t really benefit either crew more than the other.

“Hopefully Damon knows a few sneaky lines on the water that we can take advantage of,” he laughed.

With race week having arrived, training is a thing of the past and now the focus for many shifts towards ensuring all the finer details are attended to.

“Now it’s just about making sure our boat is setup correctly, our paddles are fine, our hydrations systems are working properly, etc.