The men’s race at the 2016 FNB Dusi Canoe Marathon, which takes place from 18-20 February, is set to be an epic as the sport’s most experienced and successful stars go head to head while the next generation look to throw their hats into the ring as well. 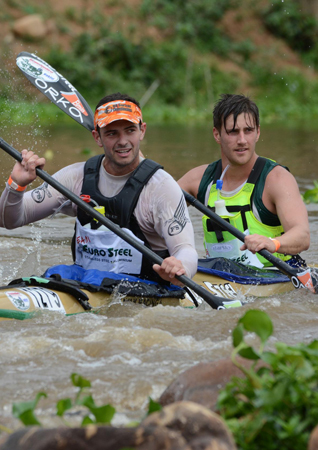 Western Cape youngsters Brandon van der Walt and Stu Maclaren are eager to represent the country’s crop of emerging stars well at this year’s edition of the 120km tussle and whilst all of their pre-Dusi races have been done with Van der Walt steering the ship, they have decided at the last minute to change the driver for the epic three-day journey from Pietermaritzburg to Durban.

“Initially I was going to drive but Stu’s lost a lot of weight and I’ve put on some weight because of all my marathon and sprint training so it’s probably best that we’ve now swapped around even if it is a little late,” said Van der Walt, a former Junior Marathon World Champ and U23 silver medalist.

“Stu’s done three Dusi’s before so he has a good idea of where to go but I’ll definitely be doing a lot of backside driving too and if he doesn’t listen, I’ll just give him a bit of a smack around the ears with my paddle,” he added light-heartedly.

Euro Steel/Kayak Racing’s Van der Walt and Maclaren have their eyes on upsetting a number of the top crews and, with the pressure that comes with such an important race, they understand that opportunities will present themselves along the way.

“To finish in the top ten would be ideal; we all know the caliber of the top crews this year though.

“There is however a lot on the line at a race like Dusi and a lot of extra pressure on those top crews because the field is so strong so mistakes can happen under those circumstances.

“We’ll just look to race our own race and try to make our strengths count as best we can,” said Van der Walt.

As the drought strangles KwaZulu-Natal, there is a lot less water in the system than there has been in previous years, something that Van der Walt sees as an advantage for he and Maclaren.

“We’re paddlers more than we are runners for sure and so a low river actually plays into our hands because the water isn’t flowing as strongly as it does normally, giving the runners less natural assistance.

“We’ve just got to look to do as much damage control as we can on day one given the amount of running involved.

“We’ve worked hard on our running and it is fantastic at the moment so hopefully we can limit the amount of time we lose on the portages and then take things from there on day two,” added a positive Van der Walt.