Czech Republic star paddler Jakub Adam could be left high and dry for the FNB Dusi Canoe Marathon that starts at Camps Drift on Thursday morning as his K2 partner Jason Graham battles to shake off a debilitating and recurring illness. 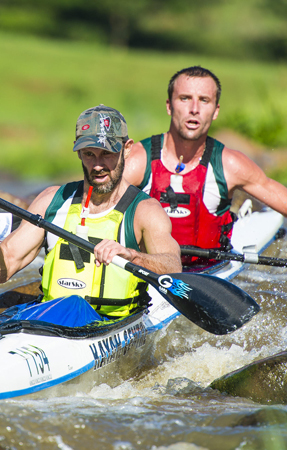 Graham was absent for the strong field that raced the N3TC Drak Challenge on the uMzimkhulu River in the Southern Drakensberg in January, citing the onset of the mysterious virus and his desire to recover fully in time for the three day classic from Pietermaritzburg to Durban.

Despite his efforts and several courses of medicine Graham, who won two Dusi titles with Andy Birkett in 2010 and 2012, is confronted with having to throw in the towel this week after failing to shrug off the virus.

“Jason is trying to be ready by Thursday to race,” said Adam. “He is seeing the doctor every day and there is still a chance that he will be able to paddle.”

“But I am worried about how he will be feeling after a tough Day One,” he added.

This eleventh hour drama threatens to derail a plan that was hatched months ago to pair Adam, who has done three Dusis to date, with a top elite local Dusi paddler under the umbrella of the newly formed Euro Steel team after 2014 saw Adam raced onto the Dusi podium with local paddler Cam Schoeman.

With just days to go before the start of the race the genial Czech Republic racer is uncertain about his Dusi plans, and if Graham is not given the medical go-ahead to race, Adam is considering racing the race in the non-championship K1 class or opting into a K2 with a less competitive paddler.

“I guess it is too difficult and too late at this stage to find another K2 partner,” said Adam. “I just hope that Jason will be OK to paddle!”