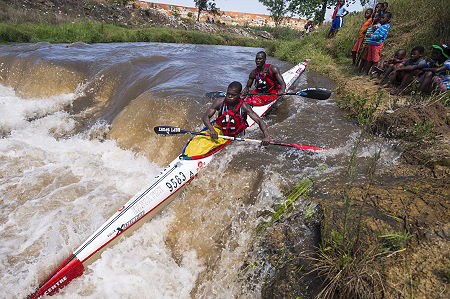 Started in 2008, thanks in large to the support received from the KwaZulu-Natal Department of Sport and Recreation, the NCC Development Programme has both introduced the sport of canoeing to thousands of children from previously disadvantaged communities as well as teaching them important life skills.

33 year-old Nyawose’s performances during his journey with the programme have contributed towards it’s steadily improving set of results and now the determined competitor is keen to secure his best ever Dusi result and help raise the programme’s profile even higher.

“Last year I set myself a goal of finishing in the top 50 in my K1 and I achieved that so now this year my partner and I want to finish in the top 20!” explained Nyawose.

“On the first day we definitely want to try be in the top ten because there is a lot of running and we are very strong runners.

“On day two there is more paddling so we might lose a few positions but then we’ll see how the race goes on from there!”

“There are thirteen NCC Development Programme paddlers taking part in this year’s Dusi and three of us are hoping to be in the top 20; one junior boat and two seniors,” said Nyawose.

“We are all going very well and keeping strong and if I look back at previous years, this year we are much stronger than before!”

The backing the programme receives from the KZN Department of Sport and Recreation, who also contribute to the annual success of the FNB Dusi, is also not lost on Nyawose and his fellow programme participants.

“The support we get from the KZN Department of Sport and Recreation is very, very important for us!” admitted Nyawose.

“They help us a lot by giving us everything we need such as equipment, boats and paddles as well as our team paddling uniforms.”

While unlikely to challenge for overall honours at this year’s FNB Dusi like their fellow NCC members title hopefuls Andy Birkett and Abby Adie, Nyawose, together with Cele, will certainly be hoping the hard work he has put in in recent months with pay off handsomely and he can fly the NCC Development Programme’s flag high.