No fewer than nine former or current marathon world champions and eleven past winners are set to tackle the 65th edition of the FNB Dusi Canoe Marathon when the 120km race gets underway at 06h00 on Thursday morning, with the firing of the starter’s canon sending the 1248 eager participants on their way from Camps Drift in Pietermaritzburg to Durban’s Blue Lagoon. 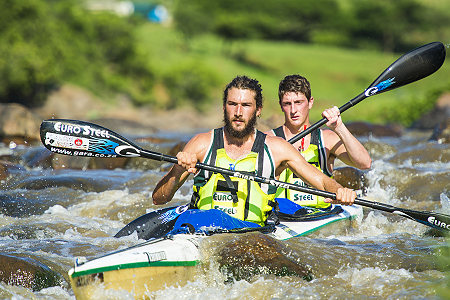 The star-studded men’s field promises to produce one of the most memorable K2 clashes since the turn of the millennium with only a brave soul willing to predict a probable top ten.

While both pedigree crews, both teams have had more eventful build-ups than they may have hoped for.

For Birkett and Kime, the latter’s opting out of the N3TC Drak Challenge in the Southern Drakensberg in January due to illness reduced his river skills preparation significantly while the reversing of positions in the boat created another last minute stress.

Similarly, Khwela and Nkhoesa’s partnership hung in the balance for much of the festive season after the latter suffered an unfortunate stabbing incident in December that wounded his shoulder and punctured his lung.

The 22 year-old has however recovered well and he and Khwela are eager to reignite their championship as best they can.

Euro Steel/Mocké Paddling’s Hank McGregor and Jasper Mocké, one of the only top elite crews to return from two years ago where they finished in second place, will too be eager to stake a claim for this year’s crown. 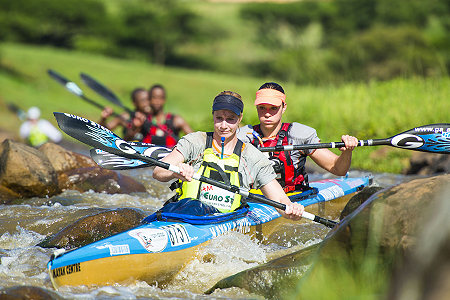 Meanwhile in the women’s race, 2016 would appear to be the year Abby Solms (Euro Steel) finally breaks her run of six second place finished when she and current ICF Canoe Marathon World Champion Anna Kožíšková of Czech Republic start this year’s clash as race favourites.

Solms and Kožíšková are however likely to have their hands full throughout the three day challenge as Techpro Racing’s Jenna Ward and Hungary’s Vanda Kiszli – double defending U23 Women’s Marathon World Champ – as well as Euro Steel juniors Cana Peek and Kyeta Purchase look to claim their share of the spoils.

The lead trio will be chased hard by the likes of Alex Adie and Tamika Haw, Pink Lady’s Donna Tutton and Hayley Nixon, Jane Swarbreck and Kirsten Penderis of the Western Cape and Kerry Segal and Julia Trodd.

Further back in the field, former Dusi tough man Andre Hawarden is relishing his return to the race he created so many memories at many years ago while Brendon Germaine tackles the challenge on his stand up paddle board for the third year running.

The continual rise of the Computershare Change a Life Academy, FirstRand SCARC and the Natal Canoe Club’s Development Programme promise another strong showing from these athletes while Candy Mavundla, Nombuso Mzolo and Nokukhanya Shange will also be on the water.

The race will also once again be supporting three causes, splitting the funds raised through the charity batch as well as FNB’s contribution between the Dusi Valley Paddlers Fund, Dusi Umgeni Conservation Trust (DUCT) and the newly formed FNB Dusi Drought Relief Initiative.

The 42km first stage of the 2016 FNB Dusi Canoe Marathon from Camps Drift, Pietermaritzburg to Dusi Bridge on Thursday 18 February gets underway at 06h00 with the leading men expected at the finish at 08h30.