Pre-race favourites Andy Birkett and Lance Kime steered clear of the carnage of the drama-laden opening minutes of Thursday’s first stage of the 2016 FNB Dusi Canoe Marathon to paddle and run themselves to a commanding three and a half minute overnight lead.

The drama unfolded minutes into the race at the Ernie Pearce Weir as the leaders jockeyed for position down the fish chute. Hank McGregor and Len Jenkins reignited their fiery relationship as the latter, with his partner Siseko Ntondini, forced the Euro Steel/Mocké Paddling pair of McGregor and Mocké into the bushes at the bottom of the weir, after colliding with them and spinning out their K2.

This meant that the crew of McGregor and Mocké, who were the first boat to the weir, lost considerable time on the rest of the field, and once they recovered their composure and restarted their race they ground through A batch to finish in second place overall.

The Euro Steel pair of Andy Birkett and Lance Kime steadily built a formidable lead over the rest of the field, striving for consistency and staying out of trouble on the slippery portages throughout a day which favours the runners as opposed to the paddlers.

“There were a few nerves going into the start of today because Dusi is a different ball game,” the five-time Dusi champion Birkett said. “You have to wait until the end of day one to see what your form is like so we just tried to keep a consistent pace from the start and race within ourselves.

“It was great fun racing with Lance out there today, we had a really clean day and we really happy to have a slight lead going into tomorrow.”

The rain fell steadily throughout the day which provided the front paddlers with some respite from what could have been a tough opening day of the race.

“Our seconders wanted to keep pouring water on us but we were already so cool and refreshed which makes for nice, comfortable racing and a great day out on the river.

“I thought that the portages would be more slippery but we still had quite a lot of grip,” Birkett added. 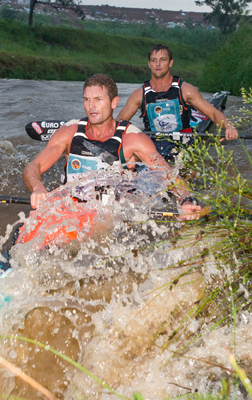 Birkett’s partner Kime seemed to have had an enjoyable day on the river made better by the fact that their goals were achieved.

“Anyone who is serious about winning the Dusi their aim is to win day one which sets you up.

“We had a pretty smooth day and had our noses ahead most of the way even after Hank and Jasper had done well to catch up after their mishap early on.

“They were just first going onto Campbell’s but from there we had the lead – I can’t say we never looked back because I did!” he chuckled.

The pair got in front and were on their own the whole day without the knowing the time difference between them and the boats behind them.

“When you seem some blades splashing in the water behind you then you get that little kick you need but we didn’t see any of that today!” a satisfied Kime commented.

A concerted surge from the Euro Steel pair of Sbonelo Khwela and Banetse Nkhoesa on the Guinea Fowl portage brought them right back into the race following a slow start and the duo finished the day well in third place.

The overnight podium is an exhilarating result for the Shongweni Dam pair, given that Nkhoesa was the victim of a nasty stabbing attack in eight weeks ago that left him with a punctured lung and severely injured shoulder muscles.

“I am really glad that we managed to finish on the podium today,” Red Bull athlete Khwela mentioned. “We managed to make up most of our places on the run because we struggled a bit on the paddle.”

After a bright start the Under 23 Mooi River siblings Andrew and Alan Houston(Seedco) finished the first stage in fifth, battling with cramps in the latter stage, finishing thirty seconds behind Shaun Rubenstein and Thulani Mbanjwa.

Czech Republic marathon star Jakub Adam was relieved to be able to start the race with partner Jason Graham who had been doubtful due to a nagging virus illness. The pair raced steadily to finish ninth, overtaking the flagging Kayak Centre/Starsky duo of Murray Starr and Owen Gandar.

One of the performances of the first day was that of the Martin Dreyer’s Computershare Change a Life Academy’s Mmeli Cele and Khumbulani Nzimande who finished eighth overall.