While the racing snakes battled it out at the front of Thursday’s first stage of the 2016 FNB Dusi Canoe Marathon, the fish and chips toiled, slogged, slipped and slid their way from Camps Drift to the overnight stop 42km downstream at Dusi Bridge, all the while with a smile on their face and the highest of spirits. 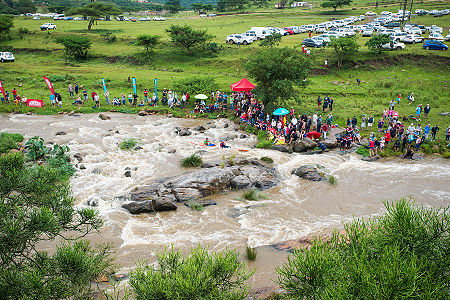 While the welcome sight of Tuesday’s overnight rain eased paddlers’ low river concerns, the pre-race downpour added a somewhat unexpected element to the race as the traditionally dusty pathways of the uMsundusi River valley was transformed into slippery slides of mud and mire, dramatically hampering participants’ abilities stay upright, let alone run the stage’s many portages.

“I’ve finished the Dusi 33 times, that was my 36th time through Devil’s Cauldron and that was the absolute worst I’ve ever seen it!” described great grandmaster Roy Swingewood, paddling this year’s race with fellow stalwart Geoff Caruth in the 25 or more Dusi finishes’ E batch.

“We’ve had some muddy years before and obviously it usually unbearably hot down there, getting up to 42 degrees quite commonly, but nothing compares to what it was like down there this year!

“Other than that though, the temperature was almost perfect and we had a good day on the water,” he added.

While admitting to having also been tested by the day’s tough paths, father and daughter combination Mark and Hannah Graham soaked up each and every moment of their journey together.

“I’ve done thirteen Dusi’s before but this Hannah’s first and it is just so special to be able to share this experience with her!” said Mark. “We just took it easy and enjoyed the day as much as we could!”

“It was great paddling with my dad,” said Hannah. “The mud, especially through Devil’s Cauldron, was so difficult and there was about as much running today as there was paddling but it was great and I’m looking forward to day two and three!”

Meanwhile, for the mixed doubles crew of Graham Christensen and Clare Ewing, the first stage took an unexpected turn as they approached the Musson’s Weir on the outskirts of Pietermaritzburg.

“The popular line down the centre was blocked by a guy who had wrapped his Kevlar boat so we headed for the right hand line,” said Christensen. “We might have been going in a little too slowly but as I tried to get to the right, the tail of our boat swung around into the current and got pinned.

“So there we sat, on what is now known as the Grassy Knoll of the Dusi, much like JFKs Grassy Knoll.

“There were so many boats coming through the only available channel, right where our boat was, that all we could do was sit there, chill and enjoy the sights and sounds!

“We eventually got our boat out, and carried on our merry way to the finish!” he laughed.

Christensen had to endure some good nature abuse from Ewing – who, like Christensen, is a seasoned Dusi Rat with more than ten finishes to her name – after she took a bettering swimming when their boat was swept into the current with the pair now keen to have their “Grassy Knoll” recognised as a new official FNB Dusi landmark.

The unexpectedly large field of nearly 1300 paddlers relished the good river conditions, bucking the drought that has gripped KZN this summer and the cool, overcast weather.

There were no significant injuries reported and very little boat damage noted.