After having to deal with a spate of frustrations and disappointments in their 2014 bid, the crew of Pietermaritzburg star Abby Solms and her Czech Republic partner Anna Kožíšková took firm control of the FNB Dusi Canoe Marathon women’s race with an imperious first stage performance on Thursday. 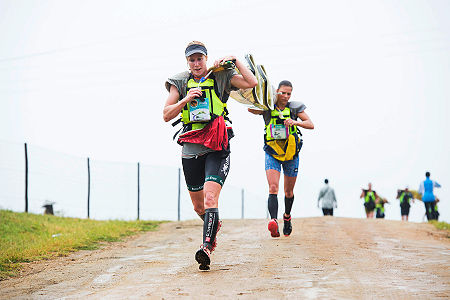 From the gun at Camps Drift the duo were in a league of their own, quickly pulling away from the rest of the seeded women’s crews and quickly catching up with many of the seeded men’s crews during the tough 42km stage raced in rainy overcast conditions.

The only blemish on their impressive performance was a slip on a portage that left Solms with an abrasion on her leg, but it did little to slow their progress.

“It was just about a perfect day,” enthused Kožíšková, who was crowned world champion at last year’s world marathon championships.

“We raced at a good steady pace throughout, and made sure we had plenty of energy at the end. It feels so good to feel strong going into the second stage,” she added.

Solms was full of praise for her Czech friend. “It feels like a massive however-many-horsepower engine in the back of the boat.

“She ran really well today. I felt that she was actually pushing me on the portages,” said Solms.

The pair earned their fourteen minute lead but don’t plan to ease back on their race plans.

“We are still racing our own race,” said Solms. “There is still so much that can happen over the next two days so we will carry on racing against ourselves and the guys around us.”

They added that they harbour a secret desire to make a statement by finishing in the top twenty overall.

“I’m not sure if that’s ever happened in a K2 year but we really enjoy racing where we are amongst the men and to try and get into the top twenty overall would be great.

Solms said the early stages of the race had been difficult as they had to battle past slower male crews, which was particularly awkward on the narrow paths of the portages at Campbell’s Farm and Guinea Fowl.

Second overnight are the plucky Euro Steel Under 18 crew of Cana Peek and Kyeta Purchase, on a day that saw them trade places on a regular basis with Jenna Ward and her Hungarian partner Vanda Kiszli, and the seasoned locals Alex Adie and Tamika Haw, who bounced back from a swim at Ernie Pearce weir right at the start.

While it will take a disaster of spectacular proportions to derails the Solms/Kožíšková train, the race for the remaining podium places promises to be fascinating.