As their formidable overnight lead of 14 minutes ballooned to well over 20 minutes on stage two of the 2016 FNB Dusi Canoe Marathon, Abby Solms and Anna Kožíšková have a maiden Dusi title in their grasps with just 36km separating them from the women’s title on Saturday in Durban. 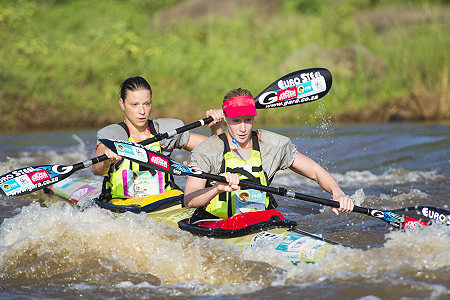 Despite the substantial gain in advantage throughout the day it was far from plain sailing for the Euro Steel duo who encountered a couple of snags through the early stages of their day.

“I can’t complain,” Solms said. “We are here in first place, but it was far from the smooth day that I had hoped for.

“Just after the start, some guys were obviously in a rush. They came flying down a rapid, drove straight into our rudder and bent it 90 degrees, which caused us problems for the rest of the day.”

Their problems were compounded when they broke the nose of their boat at Gauging Weir, but the extent of the problem only revealed itself at Hippo Rapid when they spun 90 degrees before regaining control.

“Fortunately we get nice, strong kevlar boats from Kayak Centre that are flexible and he boat and us were about to hold out to the end,” Solms said.

By the time Solms and Kožíšková reached the top of Inanda Dam, with the long flat water haul to the finish awaiting them, they were tired, but they still finished strongly.

“To be honest, at the beginning of the dam I was exhausted,” the Czech marathon world champion said. “After three kilometres I caught a second wind and I could push hard again. The wind started to blow a little bit, so it was quite nice.”

Behind the leading crew, Jenna Ward and Vanda Kiszli, who were in fourth after the first day, used their superior paddling to move up into second place after a strong showing on the dam.

“It went according to plan,” Techpro Racing’s Ward said.

“We knew that today was going to be the day that we needed to catch the teams in front of us.

“We knew it was going to happen on the flat-water paddling, so we just played it safe through all the rapids, ran as hard as we could, and when we got to the dam we knew we had to make it count.

“It didn’t take us long to drop them [Cana Peek and Kyeta Purchase] on the dam. We knew they were tired. We caught them nicely on the flat water, so we knew as soon as they took a break we had to put in an interval and go.”

The schoolgirl combination of Peek and Purchase made an error at the Nqumeni Portage, which cost them valuable seconds and energy.

“We took the wrong portage, because when people say ‘this is the old portage’, I think it is the one that I have done for the last two years, which is actually the new one.

“We missed our juice at the top of Nqumeni which I think hurt us,” mentioned Peek.

At the end of the day, however, the two 17-year-olds were in a solid third place and satisfied with their position.

“I am very happy with where we finished. I didn’t think we would do so well on the dam, but we just kept going,” Peek said.

For the leaders, Solms and Kožíšková, running Burma is also their plan of action. They have a big lead and aim to play it safe by taking on the portage, which, amazingly, will be the first time Solms, a six-time runner-up, has tackled it.

Day Three, the final day of the 2016 FNB Dusi Canoe Marathon is a 36km stage from Msinsi Resort to Blue Lagoon in Durban.