The searing heat in the uMngeni Valley pushed the big field of nearly 1300 paddlers to the limit with medics dealing with scores of cases of dehydration and cramps at the end of the 46km stage from Dusi Bridge to Msinsi Resort on Inanda Dam. 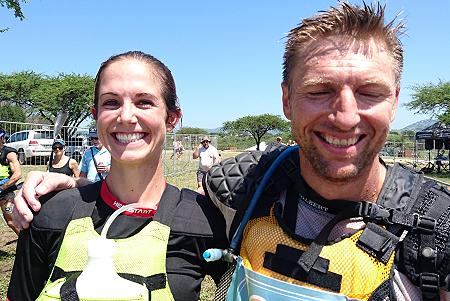 After a day of winding down the Msundusi valley, the vast Mngeni Valley with its testing river hydraulics and notoriously unforgiving rapids put paid to a number of crews chances of finishing this race.

The vast majority however completed to twelve kilometre grind to to the overnight stop at Msinsi Resort tired but elated, knowing that only the 36km final stage to Blue Lagoon stands between them and their FNB Dusi medal.

Amongst the weary but contented paddlers enjoying the luxurious hospitality at the finish were the leading mixed doubles crew of Dave Hamilton Brown and Pippa McGregor, the wife of Hank McGregor, who is currently lying second in the overall race with his Cape partner Jasper Mocké.

Being married to a former Dusi champ and six times world champion doesn’t faze Pippa McGregor. In fact it is a curiously complex arrangement, as her success in the 2016 Mixed Double race will inevitably be compared to her win with husband Hank in the same class last year.

Pippa won’t be drawn into making any comparisons to her experience paddling with her husband last year but said that the 2016 race had been a fantastic experience so far. “Dave drove so well and we shot everything perfectly.”

She did concede that they were comparing their daily results with her performance last year. “We check the results and times from last year after every stage of the race.”

But she said that once they get home her husband goers back to work on his computer and she immerses herself in looking after their son Thorsten. “There’s no comparisons or ranking system, we just share our stories at the end of each day.”

She said that her mind did wander to her eighteen month old son during the race “All the time! Luckily we have a great network of friends, family and helpers to look after him.”

Hamilton Brown said that the last minute arrangement had been brokered by Hank McGregor after Hamilton-Brown’s sister had to pull out of the race. “I sent Hank a message as a joke asking if I could do the Dusi with his wife. Sure enough he messaged me back saying she wants to do it!”

When asked how she might handle finishing the race winning the mixed doubles if her husband as a runners-up berth to show for his efforts, she chuckles mischievously. “Good. Good’.”