A flawless three days of racing from Andy Birkett and Lance Kime resulted in a combined eighth FNB Dusi Canoe Marathon crown for the pair as Birkett registered his sixth and Kime his second title at Blue Lagoon in Durban on Saturday. 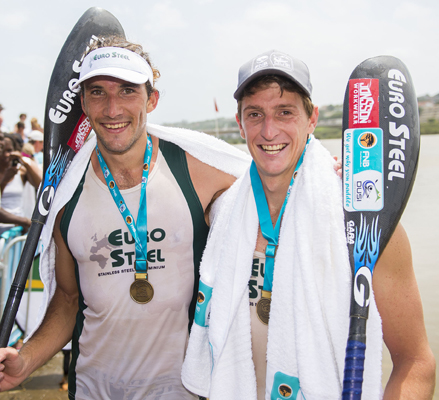 Having built up a healthy eight and a half minute lead going into the final day the Euro Steel pair had the title at their mercy following two sublime days of paddling but getting to the finish on the final day was a slog despite the absence of an immediate challenger.

“You forget that everyone is tired on the final day,” Birkett said after their win. “Everyone is racing on tired bodies because the racing on day one and day two is really tough.

“”You push it to the limit on those first two days which means that you need to keep your momentum on day three and try and not let the pace dip for too long.”

With the current drought being a dominant topic in the build-up to the race the lack of time spent on the river was a problem for the paddlers however the weather gods dished up a variety of conditions over the three days.

“Conditions wise, I think, we got the opposite to what we actually expected. In the build-up we didn’t have much of a chance to get on the river and trip a lot but the bit of decent water on day one made things easier than we were expecting.

“We were expecting a super low, super-hot conditions on day one but we got the opposite but then we got the opposite of that on day two!, Birkett smiled. “We got a hot day and not an excess amount of water so day two was some really tough racing,” Birkett added.

With the winners clocking up a ten minute winning margin the most interesting aspect of the men’s race was the battle for second.

The contest ebbed and flowed through the majority of the final day with Hank McGregor and Jasper Mocké making a navigational error that gave Sbonelo Khwela and Banetse Nkhoesa a sniff that made the race much more interesting.

“We took it easy on the downhill of Burma Road and didn’t want to twist an ankle or anything but when we got to the bottom I think I had a lapse of concentration and took a wrong path when Sbonelo and Banetse went past us.

“After the put-in we knew that we had to break their mojo and when we passed them we realised that we knew how tired we were because we didn’t pass them as quickly as we thought which just showed how strong they were,” McGregor added.

“”We knew that we had to catch Hank and Jasper before Burma because if they had an advantage on the other side it they could make up time so when we put in first we tried to go as hard as we could to try and hold them off but they caught us easily.

“Before we got to Pump House they got past us and I said to Banetse that we were going to have to settle for third place,” Khwela added.

Veteran Len Jenkins wound back the clock as he and Ad Reach/Euro Steel partner Siseko Ntondini produced the third fastest time of the final day to pull themselves from ninth overall overnight to a fifth place finish.

With a podium position in their grasp the Under 23 pair of Andrew and Alan Houston were struck down with the younger of the two, Alan, going down with a bug overnight which meant that they relinquished their podium spot but ended in fourth overall.

The Under 18 prize went to Mphilo Zondi and Mark Keeling who decimated the rest of the junior field to win by over 18 minutes over Emanuel Zaloumis and Hamish Lovemore.