The third and final day of the 120km FNB Dusi Canoe Marathon started with paddlers eager for the cool, clean water and memorable rapids of the lower uMngeni however it was those same waters that challenged some of 2016’s participants’ Dusi spirit after mishaps on the river left their race in tatters. 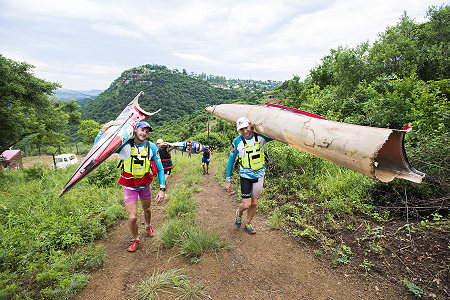 In just a moment their day soured though as a swim at Side Chute Rapid saw their K2 halved.

However, determined still to finish, in true Dusi style the pair picked up their pieces and headed for Durban on foot.

“I don’t know what happened; we swam at Side Chute, couldn’t keep the boat straight and unfortunately it wrap around the last rock!” explained Dusi novice, Gerhard.

“We hadn’t had any issues in our build up races and we’d had a great first two days on the river; it was just a freak incident but weren’t going to give up!” he added.

For Soois, a second Dusi day three effort by foot of his career was not what he’d hoped for, particularly in his son’s first Dusi attempt, however he was not prepared to walk away without a medal.

“I’ve had to run to Durban once before after breaking at Five Fingers,” said Soois. “This time it was a longer run but I wasn’t not going to finish for my son!”

Despite their final stage challenges, Gerhard thoroughly enjoyed completing the journey with his father and was thrilled to have earned his first finisher’s medal.

“We did a Hansa Fish together a few years ago and always wanted to do a Dusi and now we have!

“I’ll definitely be back, but maybe in a proper K1 next time!” he laughed.

The Scheepers weren’t the only ones to suffer at the hands of the river on Saturday as B batch starters Ant Bown and Richard Mudd’s race followed a similar path after their Tops Needle Rapid misfortunes.

“After breaking we followed the road alongside the river, had to go over Burma Road and then down through Springfield before floating across the finish line!” explained Mudd.

“It wasn’t ideal but these things happen!” he added positively.

Earlier in the day the mixed doubles race saw Pippa McGregor claim the category’s title for the second year running as she and Dave Hamilton-Brown repeated the feat she and husband Hank achieved in 2015.

“The FNB Dusi is a triumph of the human spirit, it’s as difficult for the front runners as it is for the last boat home and it was great to see 2016’s participants embracing the true spirit of the event throughout the three days of this year’s race!” said Mike Vacy-Lyle, CEO of FNB Business.

“Taking on the title sponsorship of the country’s oldest and most prestigious canoe marathon gave us the opportunity to provide an experience for participants through this iconic sporting event and further allowed us to interact closely with our current and potential clients.

“We congratulate all those who took part in the Ultimate Canoe Challenge, particularly the families, spectators and the various communities who showed their support,” he concluded.