After dominating the first two days of the 2016 FNB Dusi Canoe Marathon, Abby Solms and Anna Kožíšková duly wrapped up their maiden victory in the race as the focus of the final day’s racing shifted to the battle for second place on the final day on Saturday. 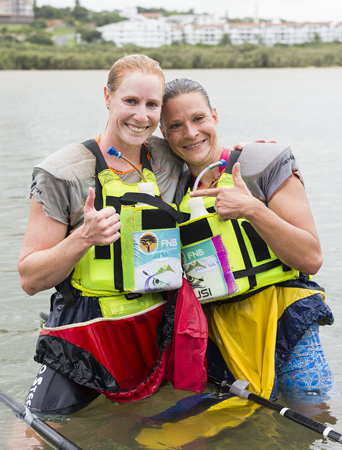 Day one brought with it rain and mud, day two was about the heat, and day three’s challenge turned out to be a driving headwind, which made for a very difficult paddle into the finish at Blue Lagoon in Durban.

After finishing as the runner-up six times, Solms finally added the only major river title in South Africa that was missing from her outstanding record, while Kožíšková became the first foreign winner of the FNB Dusi

Despite the fact that they had a more than commanding lead over the rest of the women’s field Solms found the going difficult on the final day.

“There was such a crazy headwind on the dam, huge waves of about half-a-metre crashing into the boat,” the six-time runner up said. “Some of us had to go to the edge and empty our boats. I don’t know how long it took us to get across there.

“Even when running Burma Road, we had the wind pushing the boat from the side. I did hear there was going to be a strong headwind, but I didn’t think it would be that bad.”

It was the first time that either Solms or Kožíšková had run the dreaded Burma portage and it certainly required a lot of mental strength.

“It was very tough, especially the steep part, because I have short legs and I am small and the boat is quite heavy at the back. But I managed it.”

The pair played it safe, choosing to portage at Pumphouse Weir before the long slog against the wind into Durban.

“It was down to our hard work, experience and preparation that we had such a smooth race,” Solms reckoned. “Nothing went wrong today. It was just a hard day because of the conditions that we were faced with.”

Behind the winners, the three-way battle for second place quickly become a two-way battle for the runner-up position as Jenna Ward and Vanda Kiszli, second overnight, were done in by illness, although they bravely pushed on to the finish in the inhospitable conditions.

Tamika Haw and Alex Adie, Abby Solms’ twin sister, duelled it out with the schoolgirls Cana Peek and Kyeta Purchase from the start on Inanda Dam, and it was there, in the rough conditions, that they made a decisive move. By the first portage at Top’s Needle, they had built up a lead of over a minute on their younger opposition.

They maintained it over Burma Road and then increased it when they shot Pumphouse Weir. “Burma was quite tough. I had never done it before, but we managed to walk the uphills hard and then on the downhill we went as hard as we could,” Haw said.

“I looked at Pumphouse Weir this morning and because we were all so close we decided to shoot it. It worked in our favour.”

Adie admitted: “We were hoping we could sneak onto the podium. It was a tough few days because it was cat and mouse. We were third [after day one] and fourth [after day two], but we didn’t give up and kept going.”

After a fantastic effort Peek and Purchase, both 17 years of age, had to settle for third place, while Ward and Kiszli were relegated to fourth, with the Hungarian under-23 marathon world champion requiring immediate medical treatment after finishing.