The fifth edition of the Umpetha Challenge canoe race from Camps Drift to Bishopstowe Hall on Sunday 30 October is one 2014 FNB Dusi Canoe Marathon champion Sbonelo Khwela is looking forward to using to kick start his 2017 Dusi build-up. 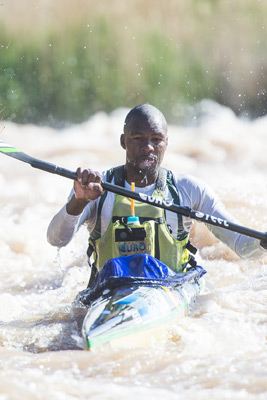 Organised by the Natal Canoe Club’s Development Programme and backed by the KZN Department of Sport and Recreation, the unique 18km event sees paddlers tackle the opening stretch of the FNB Dusi route by water before the first lung-busting portage of the new season takes them up the testing Campbell’s Farm portage to the land based finish line at Bishopstowe Hall.

After Len Jenkins Jnr. claimed the opening edition’s spoils in 2012, Khwela has shown consistent early season form to clinch the race’s subsequent three crowns and the 28 year-old is looking forward to challenging for a fourth consecutive title in just a few weeks’ time.

“The Umpetha is an exciting race each year and I will definitely be there again this year,” confirms Khwela.

“I have won three Umpetha titles before and while it is still very early season I am under no pressure at all to win it again. It would be nice if I could win my fourth title, especially a fourth in a row.”

The past weekend’s richly talented Hansa Fish River Canoe Marathon signaled the arrival of the 2016/17 K1 river marathon season and a timely return to his beloved single kayak for Khwela.

Seventh place – the Euro Steel/Red Bull athlete’s best ever K1 Fish result – at the Eastern Cape assignment has given Khwela good confidence ahead of the KZN season’s start, making him a strong 2016 Umpetha Challenge title prospect once again.

“I was so happy to finally get my first ever Top 10 finish in my K1 at the Fish this weekend!” beams the Shongweni based athlete.

“The Dusi is still a long way away but Fish went really well and hopefully Umpetha can be another good race for me too.

“I’m also very excited to be back in my K1; I love paddling my K1 because you’re on your own and you aren’t able to ever blame anyone else but yourself.”

His confidence high, Khwela now eagerly awaits the Umpetha Challenge – the first pre-Dusi event on the uMsundusi River of the season – as he looks to get his FNB Dusi enthusiasm pumping once more.

“It is early on in the season so the Umpetha is the first race that brings those Dusi memories back into your mind.

“Going down Ernie Pearce Weir, taking out at the start of the Campbells’ portage, etc. all helps remind you of what the Dusi is all about and gets you excited all over again!”

For many, including Khwela, the Umpetha’s run up the Campbells’ Farm climb is a nasty early season test and despite having spent more time on the trails than usual in recent week’s due to temporary closure of his training base at Shongweni Dam due to a toxic spill, the extraordinary running talent remains hesitant to believe the challenge will be any less demanding this time around.

“That Campbells’ portage during Umpetha is one of the most painful things I experience each year!” Khwela chuckles with a hint of trepidation.

“Most of us usually haven’t done too much running training by this stage of the season and so your legs hurt so much during that climb that by the time you get to the top of the hill it feels like you’ve been shot in the legs!

“I’ve had to do lots of trail running recently because the Shognweni Dam has been closed, so I’m in better running condition than I normally am at this time of the year, but I only start running with a boat on my shoulder in November so this year’s Umpetha will still hurt a lot I’m sure.”