Having fought onto the podium at the recent Hansa Fish River Canoe Marathon, Under 23 ace Jenna Ward’s schedule shows no sign of slowing as she eyes out an early Dusi season hit-out at the upcoming Umpetha Challenge on Sunday, 30 October.

Ward’s season has been a prolonged one with her involvement in surfski paddling as well as a flat-water and river marathon races, however with a number of high-profile results to her name she is not quite ready to take much-needed time off. 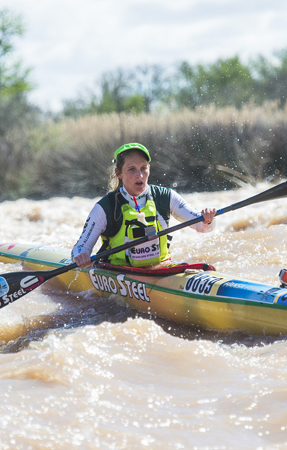 “The Fish was probably the first time that I have been in a K1 on a river since the Dusi!” the Euro Steel star commented.

“It was great to get back on the river at Fish and it has sort of ignited my passion for river racing again despite the fact that I have been paddling hard for most of the year.

“With most of my focus this year towards the Marathon World Championships recently, being in a river boat again was a nice change and I feel that I am testing out different skills and enjoying the challenge again.

“I am going to Thailand in December with my family for three weeks so that is going to be my time off. It’s not a great time for a break with Dusi in February but I really need it and I don’t think it will be too difficult to get back into training when I come home.”

The Umpetha Challenge, which is the first seeding race for the 2016 FNB Dusi Canoe Marathon, is a unique event in that it finishes on a portage, and with the race being so early in the season a lot of paddlers will not have run enough with the boat on their shoulders – Ward being one of them.

“I need to get some time in running with my boat on my shoulder because I have always seen that as my weakness at Dusi. I have no problem with the river, it’s the running that gets me so the Umpetha will be a good place to start.

“The portage hurts because it’s so early in the season but I know that I need to get the miles in my legs before the Dusi next year.

“The Umpetha is also a good way for me to start familiarising myself with the river as it has been a long time since I have paddled along that stretch in a K1,” Ward mentioned.

Over the past few season’s women’s paddling has been dominated by Abby Solms (Euro Steel/Gara Racing Paddles), who paddled to her first FNB Dusi title with Anna Kožíšková in 2016, and she will be back in 2017 to try and claim her first K1 Dusi title. Despite Solms’ dominance Ward believes that women’s paddling is improving drastically and the competition is tougher than ever.

“The competition at the Fish in the women’s race was intense and the quality and skill of women’s paddling is getting so much better which means that all races are close and that competition is what we want from all our races.

“That sort of competition makes us all better paddlers.

“The girls have already started talking about Dusi so the race is going to be super tough and if I can use all the upcoming Dusi races as a way of sharpening my skills then I am going to,” Ward concluded.