As the canoeing fraternity slowly shifts their focus to the KwaZulu-Natal river marathon season, Martin Dreyer’s Computershare Change a Life Academy’s Zulus are eyeing another strong showing at the upcoming Umpetha Challenge on Sunday 30 October, a race which signals the start of the lengthy FNB Dusi Canoe Marathon build-up. 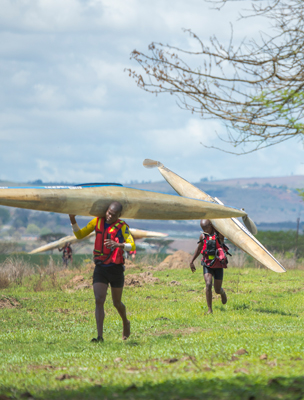 The Umpetha Challenge has been a favourite race for the Change a Life paddlers, who have historically dominated the hill-top finish, and Dreyer believes the race plays a critical role in kick-starting his paddlers’ Dusi preparations.

“It has been a really slow start to the KZN paddling season for our guys because of the drought,” explains Dreyer.

“As such, there isn’t really much of a Dusi hype amongst the guys at the moment; it just seems that the guys are a little stuck in the mud currently in terms of their training.

“That will all change with the first big rains though and in the meantime, Nagle Dam provides them with one of the most beautiful training facilities, so they have that going for them, while the Umpetha will also play a role in getting things going for our guys!” Dreyer added.

A small contingent of the Change a Life squad recently returned from the Hansa Fish River Canoe Marathon – a race where they have traditionally struggled to produce significant performances – having produced some pleasing results.

“We only had four of our core Computershare Change a Life Academy guys go down for Fish, along with Banetse (Nkhoesa) and Sbonelo,” Dreyer commented.

“This often means that our guys battle a bit but this year they went quite well.

“The water at the Fish is bigger than what they experience at the Dusi and that can unsettle the guys.

“They were competitive and performed well this year though, which is a good confidence builder, especially going into the Dusi season back home.”

The Umpetha Challenge has been dominated by the Academy product Khwela in recent years, however it is a race that is suited to the athletic build of a number of the Academy’s paddlers and so Dreyer is confident that this will continue to play into his charges’ hands come this year’s clash.

“The Umpetha is on a stretch of river that the guys all know really well and the unique finish at the top of the hill at the Bishopstowe Hall is another element that really gets them excited.

“Our guys feel like they are finishing on the top of a mountain!

“Running with a boat is a strength of theirs and so with a tough portage up to the finish, the Umpetha really plays to their strengths.

“This, added to the fact that it is the first Dusi seeding race, means that the guys are easily motivated to do well while it will also be a good gauge to see where they stand with Dusi being four months after the Umpetha,” Dreyer added.

The Change a Life Academy has been a shining light in development sport for the better part of the past decade, with Dreyer’s guidance having branched out into mountain biking and running as well.

Despite the setup’s expanding versatility, increasing the numbers of paddlers in the academy and identifying talent in the boat remains vital for Dreyer with events like the Umpetha Challenge and Dusi Canoe Marathon key to this process.

“We’ve had some fantastic results in recent years, but we don’t want to put all of our focus on just three or four guys at the top of the sport and only support them, we want to focus on the younger guys too.

“We want to expand the base of youngsters that we influence, so growing the sport amongst the younger group of paddlers in the Valley is the goal while, at the same time, also maintaining support for the guys that are at the top and producing some great results as well,” Dreyer said.