Having raced to a respectable second place at the recent Hansa Fish River Canoe Marathon, sprint ace Bridgitte Hartley returns to KwaZulu-Natal as she builds up to only her second FNB Dusi Canoe Marathon showing in February with an appearance at the upcoming Umpetha Challenge from Camps Drift to the Bishopstowe Hall this Sunday, 30 October. 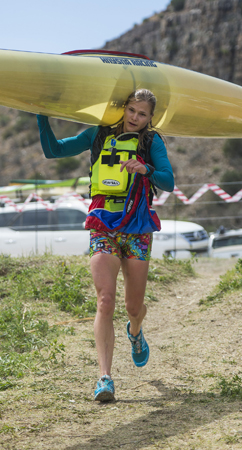 Hartley has had a glittering sprinting career with an Olympic bronze medal in the 500m K1 sprint event in 2012 and a bronze medal at the ICF Canoe Sprint World Championships in 2014 – a first for any senior South African sprinter.

She has decided to take some time out from the challenges of sprint canoeing and try and refine her river marathon as well as flat water marathon skills, as she eyes out the 2017 ICF Canoe Marathon World Championships in her home town of Pietermaritzburg.

“I am trying to do as much marathon racing as possible between now and the Canoe Marathon World Championships next year,” Hartley commented.

“Starting with the Umpetha Challenge, it is the start of a lot of marathon racing as I build up to Dusi next year.

“My only other Dusi was in 2004 when I did it in a K2 so taking the race on in a K1 is going to be completely foreign. Getting on the river in race situations is a major plus for me in that it will help me hone my skills in the pressures of a race environment,” she added.

The fact that the FNB Dusi is as much a running race as is it a paddling race is not lost on Hartley who is beginning to understand the importance of running well with the boat, especially when she comes up against Abby Solms at the Dusi in February next year.

“I don’t think that I am too bad at running so I am not too worried about that.

“Abby (Solms) and I did quite a bit of cross training together towards the end of last year so I understand how strong I have to be.

“Although the portage was not long at the Hansa Fish this year Abby and I were together the whole way. This gave me a lot more confidence going into the rest of the season even though I know that the Dusi portages are more difficult,” she explained.

Marrying the running and paddling elements, which feature in the upcoming Umpetha Challenge as well as the Dusi, is a key focus area for Hartley who does not want to dedicate too much time to either in her build-up.

“I want to try and get down into the Valley and run there so I can get accustomed to the routes.

“I have seen the Valley quite a bit but that was from a seconders perspective so I want to familiarise myself with it from a racing point of view, but I also need to focus on my river skills as there aren’t that many flat sections which play into my hands.

“I have been on the Dusi website watching some of the videos and I can remember the line down Taxi Rapid but otherwise I really need to brush up on my skills before the Dusi, and the Umpetha is going to be a good race to start,” she mentioned.

The hill-top finish of the Umpetha is in the back of all who have paddled the race’s mind’s and although Hartley has raced the Umpetha once before she knows that she will not be the only one hurting all the way to the finish line.

“That final portage is hard and everyone knows that so I don’t think I am going to be alone when I am struggling to get to the top so I just have to be ready for the challenge,” she added positively.