With a K2 victory in 2015 and a fifth in the K1 race the year prior, Shongweni rising star Banetse Nkhoesa will be hoping to race onto the podium in 2016 at the upcoming Umpetha Challenge from Camps Drift in Pietermaritzburg to the Bishopstowe Hall on Sunday, 30 October. 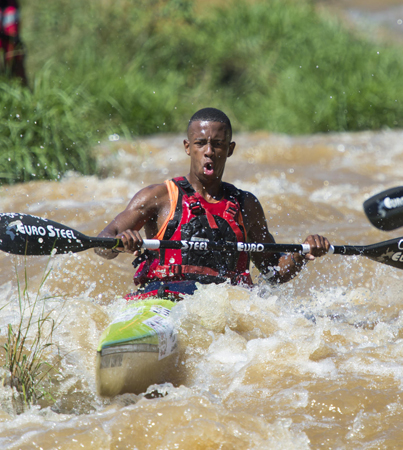 Nkhoesa has been close to the podium at the Umpetha Challenge in the recent past however the 22 year old believes that he still has a lot to achieve in a K1 as all of his big results have come in a K2 – including his 2015 FNB Dusi Canoe Marathon bronze with Sbonelo Khwela.

“I am really excited for the KZN marathon season to start as I feel that I have improved a lot since the last K1 season,” the Euro Steel paddler commented.

“I have been training hard on the dam and although I am wary of the threats other guys pose I think that they can now see me as a threat too.”

Nkhoesa’s training partner Khwela is the early favourite for the Umpetha Challenge crown with three wins in a row under his belt, however despite Nkhoesa’s eyes not being focused on the top step of the podium he is hoping to finish amongst the top three.

“I want to start the season well and to get on the podium this weekend will be a good way to get underway so that is the goal for Sunday.

“I am not sure who else is going to be at the race but I still feel that I know the river well enough that I can be competitive this weekend,” said a determined Nkhoesa, who is part of the KZN Department of Sport backed Elite Athlete Development Programme.

The recent Hansa Fish River Canoe Marathon was a race to forget for the Euro Steel paddler as he was out of contention as early as Keith’s Flyover and a protracted swim lead to the youngster contracting a bout of hypothermia which has dented his confidence slightly.

“It was the first time I had shot Keith’s and I had a really bad swim which has taken a bit of confidence out of me as it ended my race really early.

“I have spent a lot of this year in the back of a K2 so I haven’t been able to get my skills up to scratch which has been a little frustrating and I was hoping to brush up on my K1 skills at the Fish but that didn’t happen, unfortunately.

“We haven’t had any tripping time on the Dusi so this weekend is going to be the first time I’m back in my K1 on a river and it feels like I haven’t paddled on a river in years!” he grinned.

“I have been training hard already and although it is early in the season I am hoping that I can get a good result and get some confidence from the race.”

The Shongweni Dam has been an area of contention recently with paddlers being unable to use the dam to train but with the dam having re-opened Nkhoesa has been working hard on the water. This is despite the fact that the Umpetha Challenge finishes with a notorious portage up to the Bishopstowe Hall.

“I have been doing a bit of running, but not with the boat.

“The final portage at the Umpetha is tough and I know that it is going to take it out of me but it is a good thing that I know what to expect.

“All I want now is for the season to start so I can start building up towards Dusi in February,” an excitable Nkhoesa concluded.