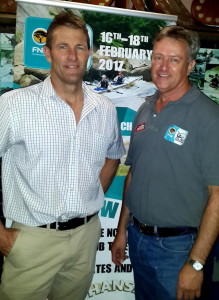 With the 2017 FNB Dusi Canoe Marathon just over three months away, the prospect of highly competitive men’s and women’s races for the respective K1 titles on offer has been boosted by the signing of a new sponsor with a specific interest in bringing four top international athletes to contest the three day classic from 16 to 18 February 2017.

Now well known as the backer of the top canoeing team in the country, Euro Steel has signed as a major sponsor of the FNB Dusi Canoe Marathon, committed to supporting the race’s remarkable development success story and inviting three top international male and one female athlete to race the 2017 K1 race.

“The FNB Dusi is an iconic race on the South African sporting calendar, ranking nationally up there with the likes of the Comrades Marathon, The ABSA Cape Epic, and the Cape Town Cycle Tour,” said Euro Steel CEO Colin Wilson. “It has an incredible history and it captures the imagination of the general public like few other sporting events do.

“Due to the fact that our racing team has performed very well in this race, we have received an incredible amount of coverage nationally. The financial pressures of running this race to the incredibly high standards we have become accustomed to, are immense. We have decided to do our bit to assist and hopefully endure its continued longevity.”

Wilson said that their involvement with the Dusi would focus on attracting four top internationals and also supporting the large number of development athletes that have made a major impact on the race in recent years.

“While we will continue to play our part in supporting the development paddlers in various areas, as part of our agreement with Brett and the organising team, we will again bring selected international paddlers out to compete in the race which serves the purposes of both raising the profile of the 2017 Dusi as well as creating interest and awareness among the international paddling community.

“This in turn can only help in portraying the country positively and help boost tourism,” Wilson added.

While many events were battling in the tough economic climate to attract sponsor investment, as the automatic response in tough times was to cut budgets. Wilson said that while the executive team had thought long and hard about their ongoing participation, the decision was made to go ahead.

“South Africa is a top tier paddling nation in world terms, and the Dusi has played a huge role in getting youngsters started in the canoeing discipline. This event, and canoeing in general, has had so many additional spin off benefits for the communities and previously disadvantaged individuals that we felt that we must grow our support as far as possible given the headwinds the economy is facing.”

“As a business we strongly identify with everything the Dusi epitomises,” said Wilson. “It ticks all the boxes in contributing to society and helping the community.

“ As a race there are many similarities with the challenges that business faces. It highlights endurance, meeting challenges and overcoming obstacles. We also strongly identify with the fellowship involved in what is one of the most transformed sports in the country.

“The Dusi continues to be our top race around which we have built the team,” said Wilson. “However we have some exciting developments for the year ahead in our planned involvement in the flatwater marathon racing series culminating in the South African national Marathon Championships followed by the ICF Canoe Marathon World Champs in Pietermaritzburg.

“In addition we will also becoming more involved in surfski paddlers and race sponsorships,” he added.