As the 2017 FNB Dusi Canoe Marathon season kicks off at the Umpetha Challenge canoe marathon this weekend the race has given members of the Natal Canoe Club’s Development Team the chance to hone more than just their paddling skills as they organise the race that doubles as the first front row Dusi seeding race on Sunday, 30 October. 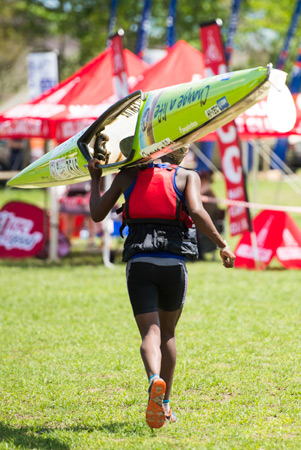 The 18km hit-out from Camps Drift to the Bishopstowe Hall has always had a unique element to it as it finishes on a tough uphill portage; however the gruelling run seems to be just what paddlers want heading into a demanding season.

Race organiser Thuthu Manyathi has been involved in the event for five years with the race’s popularity growing year on year and the hard work put in by him and his team saw the Umpetha Challenge, known in isiZulu as The Race of Champions, organisers win the Race of the Year award at the KZN Paddling Awards in 2014.

“The race has always been an important build-up race for a lot of the paddlers and we always want to try and put on the best race possible,” Manyathi commented.

“Planning such a big race is a great way for us to learn the skills that we need to organise events as well as showcase the Dusi route well in advance of the Dusi Canoe Marathon.”

Despite the race being the first race on the Dusi calendar, the Umpetha Challenge has always attracted a number of the top paddlers as they try and establish an advantage with prime Dusi seeding points up for grabs.

“I know that Sbonelo (Khwela) will be back again this year going for a fourth Umpetha Challenge title in a row.

“It’s great to have guys like him at the Umpetha as it increases the profile of the race and adds some added appeal for paddlers that might be undecided.

“The race also attracts your average paddler and those are the people that you need, they make up the majority of the field so we welcome all paddlers!

“We renamed the race to the Umpetha Challenge after we discovered that paddlers thought that the NCC Development Race was only for development paddlers. After the name change we have attracted a lot more paddlers to the race,” he added.

The race, as well as the Natal Canoe Club, has received a significant financial injection from the KwaZulu-Natal Department of Sport and Recreation in the last few years which has aided the organisers in putting on such a well-run race.

“We cannot underestimate the support we get from the Department of Sport and Recreation as well as from the KwaZulu-Natal Canoe Union, without their support the race would not be as successful as it is,” Manyathi explained.

The unique hill-top finish at the Umpetha Challenge is an element of the race that the organisers introduced as a means of easing paddlers into their running training ahead of the Dusi.

“We wanted to do something a little different and by including the portage we are following the Dusi day one route which helps paddlers familiarise themselves with that section of river again.

“It gives the paddlers an early taste of what they can expect and with Dusi only three months away I think that it really does help a lot of them realise how much training they still need to do,” Manyathi chuckled.

“They will see how unfit they are after the portage and work harder for Dusi!”