Winning the 2017 FNB Dusi Canoe Marathon is all that currently occupies 2014 K2 Dusi winner Sbonelo Khwela’s mind ahead of the three day Pietermaritzburg to Durban classic which takes place from 16-18 February.

Having tasted victory at the iconic event when he and Euro Steel team mate Andy Birkett charged to first place two years ago, 28 year-old Khwela is now desperate to add a maiden K1 Dusi win to his CV.

“I want to win next year’s Dusi very, very badly!” confirms a determined Khwela. “I’m training for a win!”

“I’ve been trying to win a K1 Dusi for many years. Hopefully I can pull the trigger this time around,” adds the Euro Steel/Red Bull athlete.

While enjoying the challenges that come with racing in pairs, the responsibility of competing alone is what truly excites Khwela and so winning the most important race on his calendar in his preferred racing format is a key career goal of the Shongweni valley resident.

“When you’re racing K1, if you’re fit then you don’t have to rely on anyone else and if you’re not fit or if you make any mistakes then you have no one else to blame but yourself.

“The Dusi is also the ultimate race for me every year and to win the Dusi in my K1 would be a dream come true!” 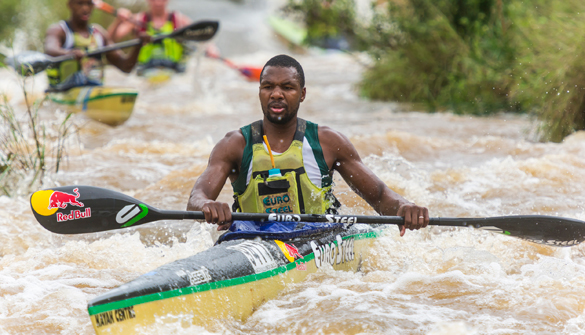 While many look to put their feet up and enjoy a break over December, the festive season will be a key phase in Khwela’s preparation as he looks to build on the base of victories at the recent Umpetha Challenge and StaminaGro 50 Miler Canoe Marathon.

“My wins so far have given me good confidence coming into the Dusi, especially because I know my running is right up there and I can see my paddling is getting there too.

“My training is on track and I can see the progress I am making each week; hopefully I can now keep that going over Christmas and into January.”

While the 2017 FNB Dusi is expected to see a stellar field, rich in talent, many expect Khwela and Birkett to be the two to go head-to-head for the spoils.

Khwela has one previous Dusi win to his name and has enjoyed a good build up coming into the 2017 Dusi while Birkett’s class and markedly improvement in his running since the 2016 ICF Canoe Marathon World Championships emphasizes just why he has won the Dusi six times previously.

“Andy is the defending champion and is definitely the man to beat,” concedes Khwela.

“He has always been a very good runner but his running is unbelievable this year – I’m confused as to how he has managed to improve so much,” he laughs.

With Birkett having made such notable strides in his running, Khwela hopes his paddling improvement – especially over the stretch from the start at Camps Drift to the beginning of the Campbell’s Farm portage – will help his title quest.

“I have always been behind at the Pine Trees take-out and then had to push so much harder and use up so much energy to catch the guys later on day one,” explains Khwela.

“I would really like to try be there with the front guys at the Pine Trees take-out this time.”

“It is hard to say what will be the difference on the day; I guess it will all come down to who makes fewer mistakes.

“It will be a big one and I’m very excited for it!” says Khwela.