With two months to go to the 2017 FNB Dusi Canoe Marathon, women’s pre-race favourite Abby Solms is confident her preparations are well on track for the iconic three-day race from Camp Drift, Pietermaritzburg to Durban’s Blue Lagoon from 16-18 February, and ready to tackle any challenges that the weather and water may throw up at her in the build-up to the big race. 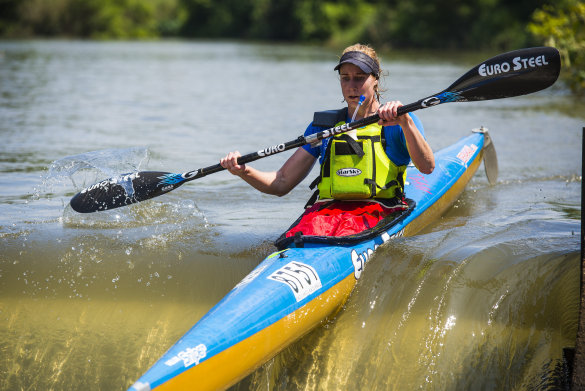 While the drought continues to leave paddlers with limited opportunities to train on the river in simulated race conditions, Solms has made good use of KwaZulu-Natal’s recent pre-Dusi build-up races and has shown unrivalled form throughout.

“In a K1 year it is important to be comfortable in your boat and I haven’t done too much training in my K1, so these races have been important for me,” says Solms.

“There are so many mixed opinions about what’s going to happen with the rain and the river levels; given the drought, some are obviously saying it will be low but others are saying that we may well have a very full Dusi, so who knows.

“If the rains come in January, as some expect them too, then we might end up getting plenty of tripping opportunities, but you don’t quite know for sure and so at this stage you’ve got to try make everyone opportunity count.”

Solms, referred to in years gone by as the ‘Dusi Bridesmaid’ after finishing second no fewer than six times in a row between 2009 and 2014, finally shook the unwelcome tag earlier this year when she and Czech Republic’s Anna Adamová clinched the race’s K2 women’s crown in commanding fashion.

The ridding of her Dusi hoodoo and rightful engraving of her name on the winner’s trophy was memorable for Solms and she is now eager to ensure she is as well prepared as possible for February’s assignment in order for her to stake a strong claim for the race’s coveted K1 title.

“As opposed to the K2 race I did with Anna in 2014 where we were within a minute of Robyn (Owen) and Abbey (Ulansky), the last couple of K1 races haven’t actually been all that close.

“In the past I don’t actually know if I’ve ever been properly prepared for my K1 Dusis and if you’re not 100% prepared then you can’t expect to win.

“I’ll go in there next year as prepared as I can be and let’s hope it all comes together.”
Given the currently uncertainty around probable river levels come race day, Solms’ accumulated experience of varying river levels and water conditions will count strongly in her favour, especially with many expecting 2012 London Olympics bronze medallist and recent Umpetha Challenge winner Bridgitte Hartley to be Solms’ nearest challenger for the women’s spoils.

“A low-ish, technical level would probably be my preferred river level for Dusi because I back my ability and my river skills.

“On the other hand though, I’ve done a few Umkos and at Fish I manage the bigger water too, so any level is fine by me,” she adds.

Regardless of conditions, the 27 year-old Pietermaritzburg based paddler will undoubtedly line up on the start line at Camps Drift on Thursday 16 February as women’s race favourite, anticipating a tough three-day tussle and eager to get her hands on a maiden K1 Dusi crown.