Despite having an Olympic medal in sprint canoeing, South African golden girl Bridgitte Hartley has taken a lot longer to earn her river paddling stripes, and with the 2017 FNB Dusi Canoe Marathon just two months away Hartley has had to get to grips with KwaZulu-Natal river conditions quickly.

The baptism of fire for Hartley has not been any easier as the drought conditions continue to grip the majority of the province and with only a handful of opportunities to cut her teeth in Dusi-style conditions she is trying to rack up as many miles as possible.

“I have done the Fish a couple of times but besides for that I think I have only done the KZN races once!” the Euro Steel star commented. 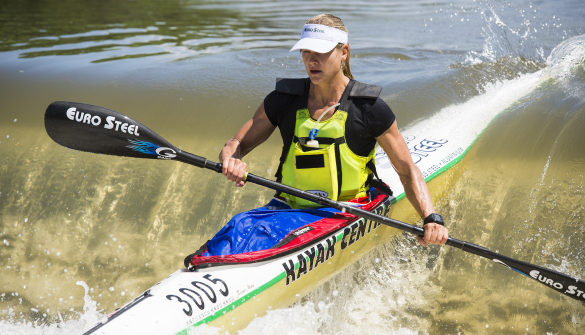 “This season is definitely a challenge for me mainly as I don’t have a gauge to compare things to. It is mostly a first time experience for me.

“With Dusi not too far away and little chance to trip the river I have got to take advantage and do as many of the pre-Dusi races as I can so I can get some familiarity with the conditions. I have seconded so many times but as a paddler it is completely different. “

Hartley has managed to get some miles in her portaging legs after she won the Umpetha Challenge that finishes with a vicious up-hill portage, and then claimed second at the Ozzie Gladwin, presented by Parklane Superspar, so she is quickly coming to grips with the rigors of running with a boat.

“If you can run well as you paddle then you will have so much leverage at the Dusi.
“My paddling isn’t bad and I feel that if I neglect it for a bit I won’t get worse so that means that I have a bit more time to focus on my running.

“At this stage I am really enjoying my running and don’t dread having to get out on the road and run,” she mentioned.

With her last major multi-day race coming at the Hansa Fish in October where she finished second behind Abby Solms, she has managed to use those positive elements as well as newly developed paddling relationships to give her the boost she needs ahead of the three-day challenge in February.

“One thing that was encouraging looking back at the Fish was that I managed to pull away from Robyn (Owen) and Jenna (Ward), so my speed and fitness levels are good.

“I have been training with some of the Maritzburg College boys and was encouraged when I was still with them on the Umpetha Challenge until I swam at Taxi.

“I know that they have more experience than me and it was good for me to see that I was able to stay with them and follow their lines – it means I am improving,” a positive Hartley added.